A jolt of panic rushed through Invercargill Mayor Tim Shadbolt when an official envelope slipped through his letterbox informing him he was being considered for a Knight Companion of the New Zealand Order of Merit.

''I should have been expecting it, but when you get an official envelope you think 'oh no, what have I done now?' It does give you a brief moment of anxiety, but once I calmed down a bit I was obviously very honoured.'' 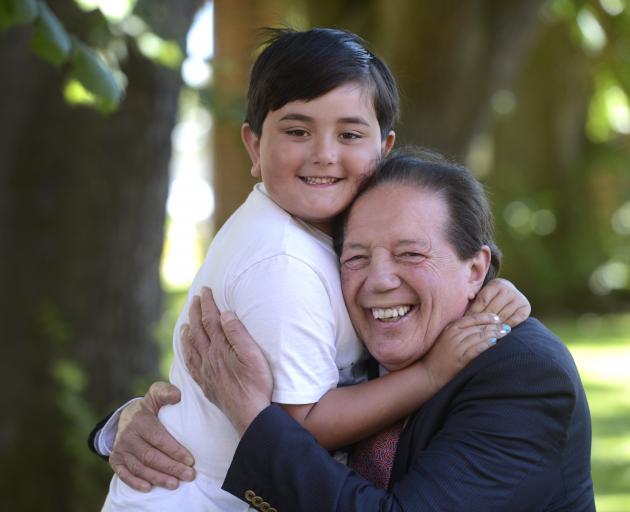 Sir Tim Shadbolt and his son Declan (6) celebrate the news of his knighthood in Invercargill last week. Sir Tim says the knighthood is also a recognition of the way Invercargill is again transforming itself into a thriving and innovative city. Photo: Gerard O'Brien

Having been arrested more than 30 times during his politically radical youth, he did wonder what the Queen would think when his name was given to her for final approval.

''She possibly spent a lot of time pondering the issue ... It's a bit of a surprise considering I've had a rather colourful past - so I feel very honoured.''

Now New Zealand's longest-serving mayor, with two terms as mayor of Waitemata City and six and counting as mayor of Invercargill under his belt, Sir Tim has been a staunch advocate of his adopted home town since he was first elected in 1993.

''This is really a symbolic award for the whole city. I mean, Invercargill people are gritty, hardworking, honest and deserve to have at least one knight of the realm representing them.''

His avid and constant championing of the city in the media has helped turn it from the fastest-declining city in New Zealand and Australia to one with a growing population and flourishing economy.

The Southern Institute of Technology's zero-fees scheme, Stadium Southland and SIT Velodrome were developed during his mayoralty.

When asked what his younger self - the one who wrote Bullshit and Jellybeans and founded a commune - would think of him being knighted, the 71-year-old just laughed.

''He would probably say I'm a traitor!

''But I think it shows the Royal Family is trying to branch out. The award is no longer just the prerogative of wealthy businessman; it can be concrete contractors as well. It's a sort of a sign of equality in that regard.''

The 2019 mayoral campaign will be his 11th and he has no plans to retire from civic life anytime soon.

''I find it tremendously stimulating and it really is the essence of democracy.You've got to stand up and say what you want to do or try to do and then the people vote on it accordingly.''

As to how his fellow Invercargill City councillors will be asked to address him during meetings, Sir Tim wants it keep simple - ''I think we'll just stick with Mayor Tim''.

Apart from his partner Asha Dutt and son Declan (6), Sir Tim had not told his family about the knighthood.

''I'm dying to tell them but it's a strict embargo and I don't want to get in trouble for letting it out and it will be a nice surprise for them.''