By Laura Smith
0 Comments
It was a race against the tide yesterday morning as a vehicle removal truck was tasked with dragging a car out of an Invercargill estuary.

A partially submerged vehicle in Invercargill’s New River Estuary was the subject of much interest; the unusual sight, located off the Stead St Wharf, got people coming down to the normally quiet area for a look at the seemingly abandoned car.

A police spokesman said police were informed about the car about 6.45am and said the regional council was dealing with the situation.

Environment Southland staff members were there about 11am to assess the situation and said it was not uncommon to be called out to things like that.

One staff member said the issue would be whether the vehicle could be reached before the tide came in. 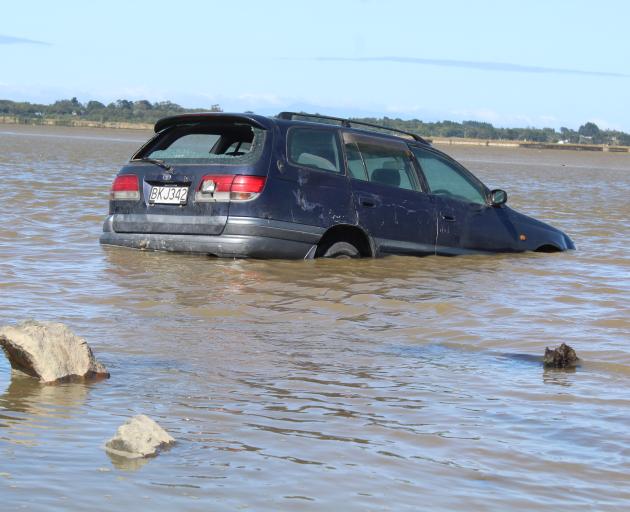 A car with a smashed rear window was found half submerged in an Invercargill estuary yesterday. Photo: Laura Smith
He called a vehicle recovery service which promptly arrived and pulled the car from its watery resting site by 11.45am.

They were mainly checking to see if there were any oil leaks going into the estuary, of which he could see none, he said.

When the car was retrieved, its interior was filled with water and sand.

A member of the public said his friend pointed out the car from the road as they were driving, and decided to check it out.

"It’s not every day you see something like that."

"Our compliance team was able to remove the car from the waterway and it was then handed on to the relevant authorities to manage."