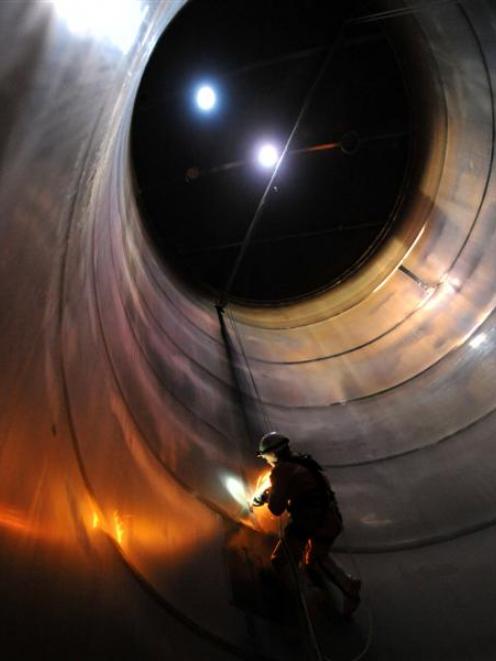 The device identified some issues in the rings of steel and so yesterday, Murray Ewing, from bMAC Sheetmetal, abseiled into the silo, with the assistance of staff from abseiling company Abseil Access.

He used a polisher to polish the surface, as a ''flawless surface'' was needed, Mr Gillan said.

To do the work, Mr Ewing was suspended about 3m to 4m inside the silo, which was about 8m to 10m in height and could hold about 150,000 litres of milk.

Mr Gillan described the robotic technology as a ''godsend'' for the annual winter maintenance programme, which was about two-thirds of the way through. Core maintenance would be completed by the end of the month. 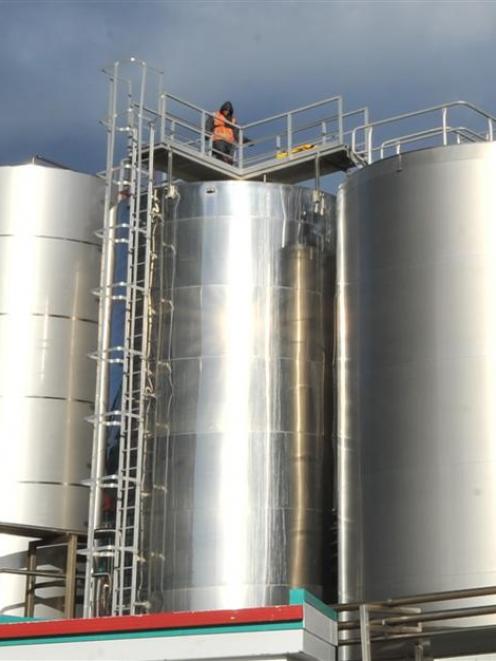 A contractor stands on top of the silo as workers abseil inside.
The Edendale site is Fonterra's oldest operating manufacturing site, processing about 15 million litres of milk a day - or about 650 tanker-loads - during the peak of the milk production season. Its total output is more than 300,000 tonnes of milk powder and cream products for export every year.

More than $70 million is being spent on maintenance at Fonterra sites throughout the country, with the majority going to the dairy co-operative's high capacity sites - Edendale, Clandeboye (South Canterbury), Whareroa (Taranaki) and Te Rapa (Waikato).

Maintenance took place over a 10-week period as milk flows dropped off. The work ranged from major capital works to minor valve and floor repairs.

It was undertaken each year to keep the sites ''match-fit'' to process more than 17 billion litres of milk annually, Brent Taylor, director of New Zealand operations, said.

''Winter maintenance is all about getting off to a good start for the next season,'' he said.