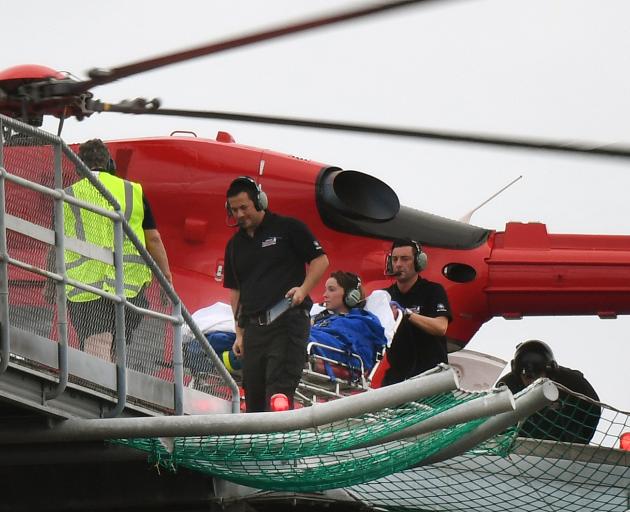 The woman is transferred from the Otago Regional Rescue helicopter to Dunedin Hospital yesterday. Photo: Stephen Jaquiery
A Frenchwoman remains in Dunedin Hospital in a stable condition today after being bitten by a shark while bodyboarding in the Catlins.

The 24-year-old was attacked just after 2pm yesterday at Porpoise Bay, which is next to Curio Bay. She suffered a gash to a leg and was flown by helicopter to Dunedin.

She was then dragged out of the water by her friends. She remained calm after the attack and "handled it very well".

"She was conscious the whole time, but had a pretty good gash on her leg. There wasn’t a ton of blood. Obviously, it wasn’t an arterial bleed," Mr Smart said.

It would need a lot of stitches.

Mr Smart had just finished a surf lesson and was back at his office when the attack occurred.

"I looked down the beach and I saw someone running and I just thought something wasn’t right."

He quickly drove down to the beach and, after learning it was a shark attack, called 111. He got his stretcher and took her to a friend’s house near the beach, where they put pressure on the wound and kept her warm by placing her next to a fire.

"Emergency services when they arrived, they cut her wetsuit off and applied a lot of pressure."

While the injury was serious, he believed she would fully recover from the attack.

"She’s not losing her leg or anything like that, but she has got some pretty good wounds. It will definitely take a while to heal up those wounds." 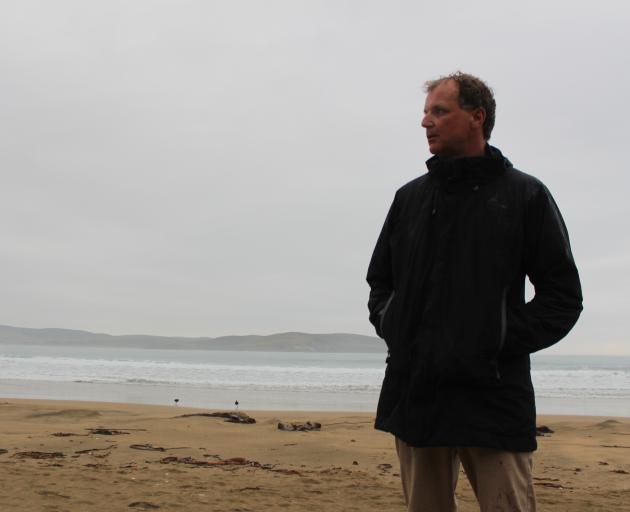 Catlins Surf owner-operator Nick Smart at Porpoise Bay yesterday where a woman was attacked by a shark. Photo: Samuel White

Mr Smart was full of praise for the response from emergency services, which he called "text-book".

He was unsure as to what type of shark it was and did not want to speculate, but believed it to be a shark rather than a sea lion.

The last  shark attack at the beach was three years ago.

"The two shark attacks we have had at this beach, to me, that’s the worst of attacks ever ... in the history of surfing in New Zealand. It’s just unfortunate both times happened to be at Curio Bay."

Department of Conservation marine scientist Clinton Duffy said a range of shark species could be found in that area, including great whites, mako, blue sharks and broadnosed seven-gill sharks.

"And the species most likely to be involved in an attack is either going to be a seven-gill or a great white shark."

It remained extremely rare for swimmers and surfers to encounter sharks in the wild, let alone be attacked by them.