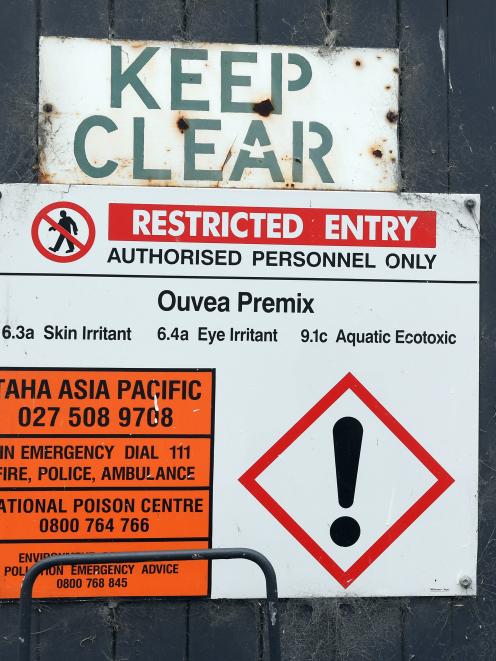 Photo: ODT files
A seven-year fight to rid Mataura of toxic ouvea stored at its former paper mill is finally over with one of the Sort out the Dross campaigners exclaiming "thank God it’s gone".

The Government announced yesterday all 10,000 tonnes of aluminium dross byproduct stored in Mataura's old paper mill had been removed.

Sort out the Dross spokeswoman Laurel Turnbull said yesterday the people of Mataura could now relax knowing the last of the ouvea had been transported out of the town last week.

"It’s been a long time coming and we can all breathe easy when it rains.

Taha Asia Pacific moved the waste, a byproduct from aluminium production at the New Zealand Aluminium Smelter at Tiwai which becomes toxic when wet, into the Southland town without permission and then went out of business.

Smelter owner Rio Tinto negotiated a deal with the Government and local councils in early 2018 to clean up the waste over six years.

However, flooding and a fire last year highlighted the vulnerability of the people who lived near the plant and along the Mataura River, causing outrage among residents and leading to a heated public meeting attended by many from the community.

Former New Zealand First MP Mark Patterson set up a petition which attracted 1534 signatures and then presented it to the Government in May last year .

It was then the Environmental Defence Society took up the baton on behalf of the community, taking legal action to determine who owned and who would remove, the material.

After eight mediation hearings, overseen by Environment Court Judge Laurie Newhook, it was agreed the Ministry for the Environment would share equally with New Zealand Aluminium Smelters the additional costs of accelerating the removal.

Each would contribute up to an estimated $500,000 each for these additional costs.

Mrs Turnbull said deals to rid the town of the ouvea had come and gone and she sometimes wondered if this day would come.

"If we hadn’t had the floods last February I think it would it would have been there a lot longer."

They are being stored in watertight shipping containers at the Tiwai Point smelter.

"Now that the Mataura site has been cleaned up, the focus will move to the removal of material from other known sites in Southland."

Sort Out the Dross members were surprised at the announcement the ouvea had been removed last week, having been told they would get a two-day warning before the last truckload left town, she said.

"We were going to do a guard of honour out of the town for it."

They had not been invited to a tour of the mill which was being run by the Gore District Council today, she said.

She believed a community dinner would be organised for everyone to celebrate.

It is a wonderful outcome. Shame community groups who actioned to start the "ball rolling" and progress are shut out of the events to recognize the end result. Communities need community groups to build stronger, healthier communities - it is therefore a shame they do not get included in elected community events.