Too many tuatara with nowhere to go 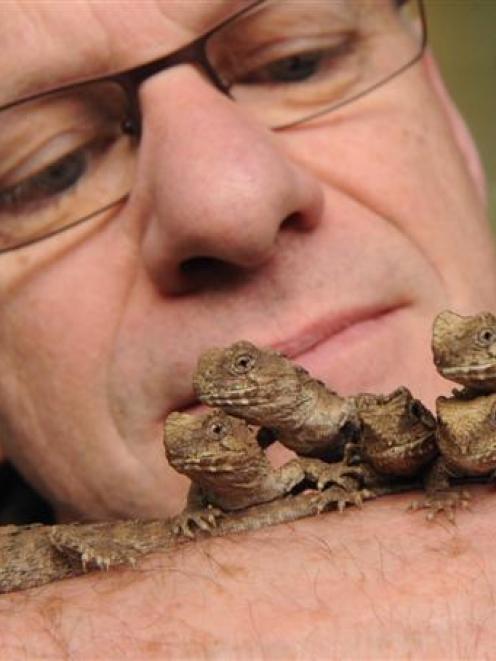 Southland Museum and Art Gallery tuatara curator Lindsay Hazley counts his charges. Photo by Stephen Jaquiery.
The country's longest-serving tuatara breeder now has more of the reptiles than he can easily find homes for.

Southland Museum and Art Gallery tuatara curator Lindsay Hazley, of Invercargill, started out 27 years ago with just two of the endangered "living fossils".

"I've got about 30 animals under 4 years of age which I need to move on shortly."

The museum's tuatara surplus is the result of Mr Hazley overcoming many captive-breeding problems and he is getting 20-30 fertile eggs each year.

"With the new acrylic roof I got from Germany that let's all the UV (ultra-violet light) through, I'm getting a 90% survival rate rather than a 90% failure.

"I'm sending eggs to Victoria University from now on because I'm saturated."

Mr Hazley would like to liberate some of his animals on a tiny pest-free island in Foveaux Strait.

"It would be just [big] enough to put a few animals on to see how they are going to do."

Mr Hazley said he had been talking to interested parties about the possibility for 20 years but there had been little progress.

He believed it was not the museum's job to make the project happen.

"It's more of a Doc or iwi thing. Somebody else needs to drive it. I can breed the animals for it but no-one's out there wanting to drive it."

Mr Hazley believed Southland iwi were happy with the idea but consent was needed from iwi in the Nelson region.

Most of the tuatara held at the museum originated from Stephens (Takapourewa) Island in Cook Strait and their kaitiaki (guardians) are Nelson-based Ngati Koata.

Spokeswoman for Ngati Koata, Celia Hawea, told the ODT she was not aware of Mr Hazley but was new to the tuatara portfolio. However, movement of tuatara was subject to a moratorium.

"It's something we are trying. We are in the process of fixing up our internal processes and things."

"And that iwi at the moment, I guess you could say they've got a moratorium on it but they are finalising their policy on what they should endorse and what they shouldn't."

Mr Gaze said the iwi's actions were affecting proposals to translocate tuatara into the Orokonui Ecosanctuary at Waitati, and into two other "mainland islands" at Cape Kidnappers and Young Nick's Head in the North Island.

"The department is waiting patiently for the iwi to sort out that process, to sort out where they stand on these proposals before we can take the next step."

The moratorium does not affect the movement of tuatara between different captive breeding enclosures.

Mr Hazley said he suspected the issue was not high on the iwi's agenda.

"It's probably more urgent for me with my [tuatara] numbers sneaking up."

Eggs produced at the museum had been used to introduce a few tuatara into the Orokonui Ecosanctuary but Mr Hazley said he had not been asked to provide more.

"I've certainly got surplus animals here at the moment. If Orokonui was wanting them, I'm sure something could be arranged."

University of Otago zoologist, Associate Prof Alison Cree, who works with tuatara at the ecosanctuary, said it was hoped the sanctuary could obtain juveniles from the Nga Manu Nature Reserve at Waikanae rather than Southland Museum.

"The decision about where animals go from captivity is one for the Department of Conservation in the final analysis, but genetic issues are a relevant factor."

Prof Cree said those available from the nature reserve were from "wild-hatched" eggs.

"Because these wild ones come from a variety of different clutches and the incubation temperatures are known and controlled to produce a mixture of sexes, they are a better source for establishing a new wild population."

Mr Hazely clocks up 40 years at the museum next year but has not lost any of his enthusiasm for tuatara.

"I'm not finished yet. I want to get them out in Fouveaux Strait. That's my big challenge."