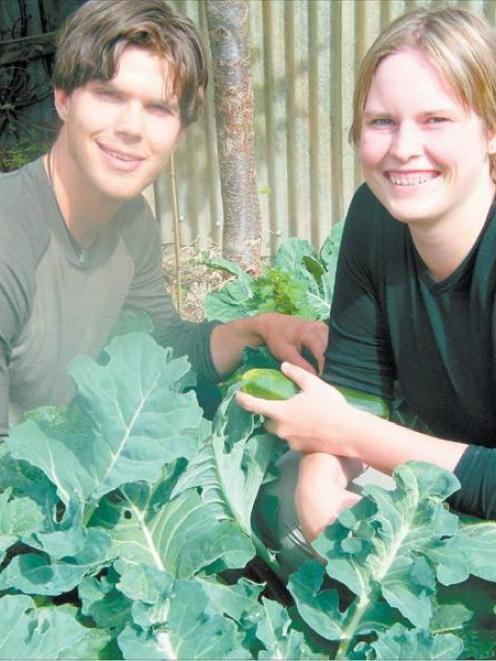 Sean Alter and Emily Buhr, both of Seattle, came to New Zealand as members of Willing Workers On Organic Farms (Woof) and are spending some time volunteering at the Gore Community Garden in Oxford St.

This is their second stint with the organisation.

Miss Buhr said ‘‘woofing'' was not only an inexpensive way to travel but it also provided a way to get first-hand knowledge of a country's culture and its people, while learning about organic principles.

‘‘You really get to spend time [in a community] instead of just buzzing through,'' Mr Alter said.

He found out about the organisation through the internet and the idea appealed to him.

‘‘I love working outdoors. It's a way to learn more about organic farming,'' he said.

During their stint volunteering at the Gore Community Gardens, the pair have been planting, tilling and weeding.

They had also sold produce from the garden at the Mataura Community Market, which they described as a ‘‘great'' experience.

‘‘That was great meeting people and we sold all the produce we brought, except maybe the kale, so that was exciting,'' Miss Buhr said.

Mr Alter said he had felt ‘‘very needed'' while working on the garden project.

The couple described Gore's community garden as an inspiration to them.

‘‘It's an inspiration to see how much was accomplished in such a short time,'' Mr Alter said.

There was a growing trend in Seattle for people to eat local produce and to see the principle in action was inspiring, they said.

‘‘To see it operating and and be involved breeds positive energy,'' Mr Alter said.

Gore Community Garden spokeswoman Julie Jenkinson said the gardens had been operating since August and the aim was to produce low-cost produce for families while providing education and fostering a sense of community.

There had been four intakes of ‘‘woofers'' through the gardens and organisers appreciated their enthusiasm, Mrs Jenkinson said.
The Ensign
Comment now