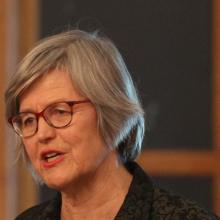 Eugene Sage
With the deadline for submissions on proposed changes to the whitebait fishery looming, Conservation Minister Eugenie Sage is urging people to have their say while they have the opportunity.

Changes could include the phasing out of sock nets, traps in nets and screens, restrictions on equipment used and how it is used, introduced refuge areas and alterations to whitebaiting season dates.

The purpose of the changes was to reduce fishing pressure on whitebait, ensuring the sustainability of whitebait fishing.

Minister Sage said, "New Zealanders want to ensure that whitebait numbers flourish, while maintaining a healthy fishery long-term. It really is important that as many people as possible submit on the proposals I have outlined."

Submissions were due to close on March 2, but because she wanted to "ensure we hear from as many New Zealanders as possible", the consultation period was extended to March 16.

Controversy on the topic sparked comments made by a Southland Fish and Game councillor at a public meeting on the proposed changes in Invercargill, where Cr Ken Cochrane said the whitebait working group that had input on the changes was influenced by "chick scientists" from the Department of Conservation.

While fellow councillors asked for his resignation last week, he refused to step down.

Council chairman Graeme Watson said he had no further comment but the issue would come up at the next meeting on March 19.

Minister Sage told the Otago Daily Times on Tuesday, "I am confident that Southland Fish and Game can resolve the issue with Mr Cochrane, however if they wish to formally request my assistance, I would consider any such request."