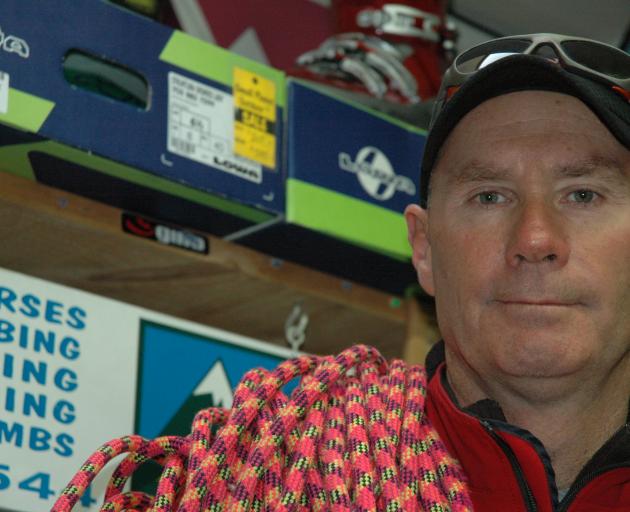 Dave MacLeod. Photo: Supplied
An adventure industry veteran fears the adventure will be taken out of the industry should a new safety regime be introduced.

As part of the response to the Whakaari tragedy, the Ministry of Business, Innovation and Employment (MBIE) reviewed how to regulate safety in adventure activities and found several areas that could be improved.

Consultation on proposed changes opened yesterday and southern agencies and operators have set about seeing what could be in store.

Independent Mountain Guides director Dave Macleod has been in the industry for 37 years.

He said the proposal would add a layer of bureaucracy that would squash any remaining adventure within the industry.

Mr Mcleod felt nothing could stop natural catastrophic failure, apart from ‘‘don’t be there in the first place’’.

‘‘Installing more box-ticking creates a non-thinking approach to problem solving and an exercise in the justification ‘‘that box has been ticked so ‘what could possibly go wrong now?’.’’

Follow that rule and you were doomed for failure, court cases and bankruptcy, he said.

‘‘These activities, by their nature, come with risk. It is too early to provide comment on the proposed changes as we are currently reviewing them.’’

Great South was in the same position.

On average, six people die in adventure activities per year, and four of these deaths are caused by natural hazard events.

The consultation document explained while most operators were able to manage risks to acceptable levels by adopting good safety management practices, the ministry believed there were some circumstances where it was too risky for adventure activities to go ahead regardless of how risks were managed.

Unacceptable risk levels may relate to identified high-risk natural hazards, such as climbing on a rock face with an imminent risk of collapse, or where precursor natural hazard events have taken place, such as successive large avalanches taking place in a specific location.

Adventure activity operators are already required to do all that is reasonably practicable to manage the risks of their work.

However, the ministry felt that while in most cases leaving decisions about whether operators could manage the risks of activities to operators was appropriate, commercial incentives could lead some operators to push boundaries.

Given that incentive, it felt it useful to consider if there were times the Government should be more involved.

As for WorkSafe’s involvement with operators, it suggested two key areas improvements can be made: increasing the information operators provide to WorkSafe about their activities, and broadening WorkSafe’s powers to cancel and suspend an operator’s registration.

On average, the safety audit cost for operators was estimated to be about $10,000 over a three-year period, but could increase by 5% to 15% under the proposed changes.

Minister for Workplace Relations and Safety Michael Wood said the Government was committed to learning lessons to reduce the risk of a similar incident to Whakaari happening.

“Adventure activities are a key part of our tourism sector . . . It’s important we provide as safe as possible experiences for New Zealanders and international visitors once our borders reopen.’’

Consultation about the adventure activities regime will close on November 5.

Operators were sued after Whakaari. That should have informed practice.