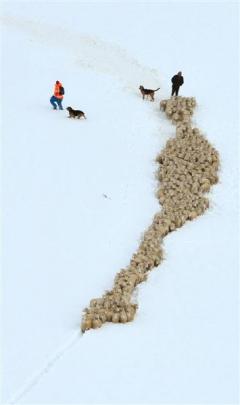 Sheep are driven through deep snow on Waipori Station, near Lake Mahinerangi, to lower ground where they can be fed, during a snow-raking operation yesterday.

A massive rescue operation is under way in Otago's high country, where thousands of sheep and cattle are stranded in thick snow cover.

Volunteers are needed to help farmers access and feed stock on about 40 stations above 500m throughout the region.

Otago's high country farms are among the worst-hit in the South Island.

Up to one metre of snow has isolated sheep and cattle and prevented farmers from surveying the damage, so it is too soon to know the extent of stock losses.

Snow also started thawing for the first time yesterday, since falling on Tuesday and Wednesday.

All snow warnings have been lifted and the MetService is forecasting icy nights and increasing fine spells with the odd rain shower in Otago up to Thursday, when snow showers down to 300m are expected.

Snow lying in a thick layer is expected to persist on the ground for some time, due to low temperatures and short days.

Today, farmers will continue snow-raking so stranded sheep and cattle can make their way to areas where they can be fed.

Helicopters will continue to be used on many high country stations where snow is too thick for tractors and bulldozers.

Yesterday, Helicopters Otago had seven aircraft in the air working to help between 20 and 30 high country stations.

Pilot David Gale said the snow was widespread, from Tarras to St Bathans to Danseys Pass, across Naseby, Kyeburn, Clarks Junction, and down to the hills around Roxburgh and Lawrence.

''The 2002 snowfall was more in isolated pockets, but this covers a much larger area. Today was the first time farmers could get a clear look at their farms - a lot of plans have been made today,'' Mr Gale said.

Dave and Hayley Vaughan have managed the Landcorp farm for about a year, but neighbours said it was the worst snow they had seen in the area for decades.

Mrs Vaughan said they were ''extremely fortunate'' to have electricity, unlike some nearby farmers.

''All of our snow came on Wednesday night and this is the first day we've been able to get access by helicopter. About one third of the farm on the north side of the lake is cut off so, first thing this morning, the boys went to have a look to see what state the stock were in,'' she said yesterday.

Young sheep were especially weakened by the snow and unable to get out of gullies, so tracks had to be made for the animals to access places where winter feed could be dropped.

''We put stock in our most sheltered paddocks before the snow, but the sheer volume of snow and it coming all at once has caused problems. We never imagined it would be this much,'' Mrs Vaughan said.

Mount Gowrie Station owners Jim and Ainslie Macdonald, at Clarks Junction, were also happy to have power, considering ''well over a metre'' of snow had fallen on their farm.

''This is day five and we haven't been able to find some stock. We've had to have the helicopters in to find them. About 20 years ago, we had a seriously bad snowfall when we didn't see a paddock for 42 days, but this one we would consider worse. Mother Nature has thrown us a wild card this time,'' Mrs Macdonald said.

The Taieri was in for ''an awful lot'' of water from thawing snow, and in the meantime ''exhausted'' sheep would need much of the winter feed, she said.

Charlie Hore said his own farm at Patearoa only had about 20cm of snow, but it was ''unbelievable'' at the other end of the plain, where up to a metre of snow had people from throughout the Maniototo rallying to help for worst-affected farmers.

Volunteers would be needed all week to help clear tracks for stock in the snow.

Those interested in helping could contact Otago Rural Support Trust co-ordinator David Mellish on 021 102-9890 or via his email: drdavem@hotmail.com.

''Any volunteers who are fit and able and willing will be much appreciated,'' Mr Mellish said.

''They need to have really warm clothing and a change of clothes,'' he noted.