0 Comments
Despite strong headwinds in the past, five women who share a passion for aviation are determined to fly to new heights as helicopter pilots.

The women are all training through the pilot qualification pathways on offer at Wanaka Helicopters’ aviation school.

It is a big deal to have a group of women training at the aviation school together in an industry historically dominated by male pilots.

Even now only 3% of commercial helicopter pilots are women.

Wanaka Helicopters academic co-ordinator Brian Paavo said inquiries by women into training for both the diploma and private licences had increased over the past three years.

The pathways training includes a Private Pilot’s Licence (PPL), Commercial Pilot’s Licence (CPL) and Diploma in Aviation (rotary), a two year degree with both licences as do other courses, but Wanaka Helicopters also offers two of its own scholarships for Diploma of Aviation students, the only school to provide this financial support in New Zealand.

The five women training at present all come from different backgrounds.

Diploma in Aviation student Brianna Curtis said she was attracted to the career pathway after growing up around helicopters.

"I grew up on a high country farm in the Cardrona Valley. We use helicopters on the farm to help with mustering the high country, for pest control, spraying and fertilising. As a child, the days that helicopters were buzzing around our hills were the most exciting, and I often got to go for a little joyride after the work was done," Ms Curtis said.

The passion for aviation has been inter-generational with her mother acquiring a PPL in the ’90s and strongly encouraging Ms Curtis to pursue her dream of flying.

Despite being the only female among six men in her diploma course, Ms Curtis said she had found the aviation community "very supportive and inclusive".

"I’m naturally very competitive and like a challenge, so the fact that as a woman I may be a minority in the aviation industry only makes me want to work harder to prove myself," Ms Curtis said.

She aspires to work across a variety of different aviation occupations including scenic flights, safaris and animal conservation work.

CPL student Holly Ansley said despite low numbers of women flying, they were around and it had been encouraging seeing more coming through.

"I would like to think young girls considering learning to fly wouldn’t be put off by aviation being traditionally male-dominated. I think the most common misconception is that people assume the stigma around women in aviation is similar to how it has been in the past. I personally haven’t found this to be the case — everyone has been really supportive," Ms Ansley said. 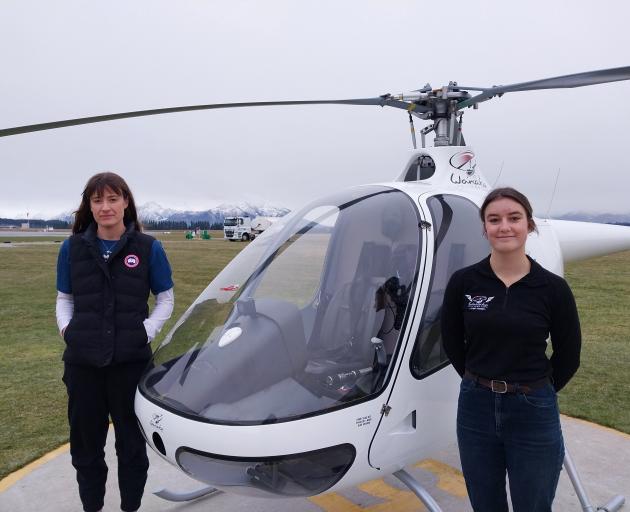 Despite only 3% of commercial helicopter pilots being women, Wanaka Helicopters’ aviation school students Holly Ansley (left) and Brianna Curtis, standing next to a Guimbal Cabri G2, represent the future of women within the aviation industry. PHOTO: ASPEN BRUCE
She is at present completing her CPL alongside studying for a postgraduate degree in Aerospace Engineering at the University of Auckland.

Ms Ansley has prior flying experience, already holding her PPL for fixed-wing aircraft.

Between the two aircraft types, she said she enjoyed flying rotary because of the range of locations accessible.

Current PPL trainee Jhalak (Minky) Chadha said it was sad there were still a lot of misconceptions about women in aviation.

"I have heard stories about how some people in the world, even today, find it hard to believe that women can become pilots. I feel these misconceptions come from either an old-school way of thinking or a lack of knowledge of the aviation industry. I believe that these misconceptions should generally be ignored and should not hold anyone back from pursuing their goals," she said.

Recent CPL graduate Elise Stables said she was drawn to the profession after travelling.

"I came home with a search for a job I could travel, work outside and a lifestyle that I would always be chasing adventure — flying was exactly that. Helicopters always fascinated me and to be able to fly out and land almost anywhere, be away from civilisation and out of phone reception sounded perfect to me," Ms Stables said.

Being Australian, Ms Stables said she would like to spend some time flying there and in Canada, where she had connections.

"Getting to come back and fly around the mountains in New Zealand will always be pretty special and I’m really lucky I got to learn to fly here," she said.

Wanaka Helicopters chief executive Pete Spencer-Bower said any previous stigma associated with women in aviation had begun to dissipate over the years.

"I think the culture’s changed a bit over time and made it more accessible for females to fly. There’s no difference between men and women flying. Most of them are better prepared than their male counterparts," Mr Spencer-Bower said.

The diploma is a two-year accredited tertiary degree, with graduates qualified with both commercial and private pilot licences.

Career progression is a key priority in the two-year degree.