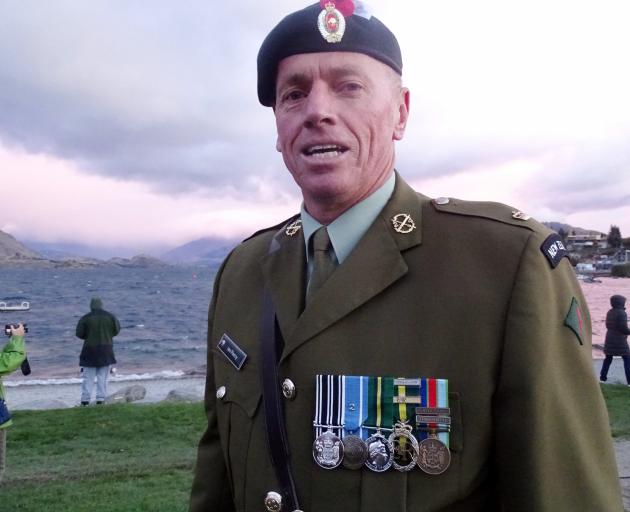 This year he was back again conducting the Anzac Day dawn service beside Lake Wanaka.

"Anzac Day means many things to me. The first thing I think about is the comrades I have lost overseas in conflict zones, my grandfather who served in Gallipoli, my home, my country, my service. It is a very emotional time for me."

Maj Piercy has served overseas in both the Regular Force and the reserves and as part of a United Nations peacekeeping force.

He said seeing the huge crowd on the lakefront at the dawn service yesterday made him pause and reflect on the times where he has been working under extreme conditions and wondered whether "I was going to be around tomorrow or not, for the service I have given my country".

"Seeing folks supporting me and fellow service people today makes it worthwhile and I would do it again in a heartbeat," Maj Piercy said.

Organisers were amazed at the number of people who attended the service, particularly children.

It was the second Anzac Day service Hannah Howis (10) and her sister Isla (7) had attended since moving to Christchurch from England two years ago.

In Wanaka for the school holidays, Hannah said the Lake Wanaka dawn service felt "very special here", while her younger sister said the cold weather made her think "about the soldiers that were cold".