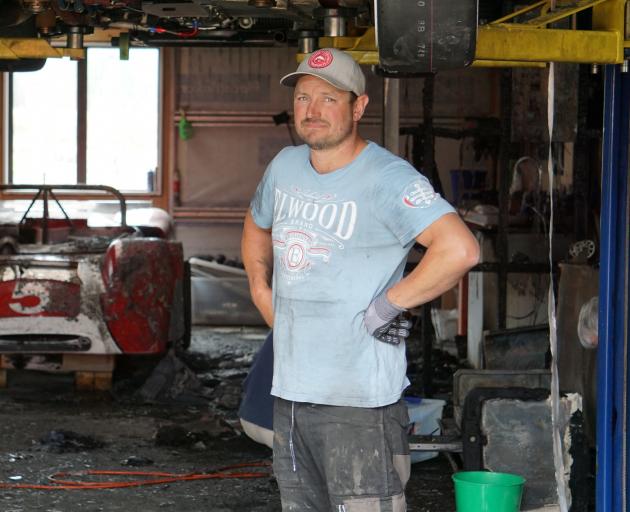 Andy Giles, his partner, Jenny Clark, and her daughter, Samantha (17), were asleep in their apartment at one end of the large shed when the blaze started in a far corner, just after 1am.

They were alerted to the fire after one of the car's tyres exploded.

''I got the girls to go straight outside and I came out here to grab the fire extinguishers and put it out.''

Despite having three on hand, none of them worked, and the family was forced to watch as the flames engulfed some prized possessions, including at least two cars and part of Mr Giles' partner's florist studio.

He estimated damage to the cars, including a Rorstan Sports, was at least $100,000.

A weekend racing driver, Mr Giles had used the garage as a workshop since moving to the property last Easter.

''I was supposed to be racing at Highlands tomorrow but that's not happening.

''I'm gutted. I've been working on this solidly for a year in my spare time.

''It could've been far worse, though. The fire service were amazing. If they'd taken another 10 minutes, it would've all been gone.''

''It was one of those ones where it got into the walls and ripped all the linings off and everything else.''

Fire and Emergency New Zealand specialist fire investigator John Smalls said most of the property was saved due to the promptness of the brigades from Wanaka and Lake Hawea, which arrived in just 12 minutes.

Having investigated the scene yesterday morning, he said the fire was not suspicious and believed the most likely cause was a lithium-ion battery charger.

''It's most likely related to a battery charger as it was the only thing operational at the time.''

Due to the open nature of the shed, the damage was ''reasonably extensive''.

He said the apartment had filled with smoke and did not have smoke alarms.

The family was ''very, very lucky'' to have escaped without injury.

''The best message I can get across is that if you don't have working smoke alarms on your property, you need to go out and get them.''