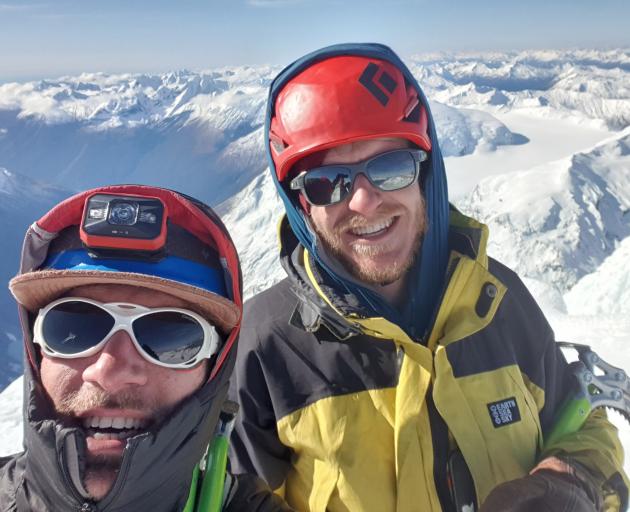 A selfie of Melvin Krook and Andy Hoare (right) at the summit of Mt Aspiring, unaware they would strike disaster moments later on their descent. PHOTO: MELVIN KROOK
The skier who survived a 400m fall down Mt Aspiring thought he was going to die from hypothermia.

Luckily for him, he only suffered a fractured vertebrae, a fractured sacrum and a badly dislocated knee.

Andy Hoare, of Christchurch, and a friend climbed the southwest ridge of the Wanaka mountain and reached the summit just after 2.30pm on September 2.

Their trip turned sour when the 33-year old started his descent and hit an icy patch.

They had just started skiing down the west face in what he described as "not too bad" snow conditions when he lost his balance.

"I hit a hard icy patch of snow and then caught an edge.

"I dug my ski boots in and slowed down a bit but then caught them on a hard patch and started to rag-doll down the slope."

Mr Hoare said he remembered falling backwards and trying to dig a ski pole into the snow.

"I knew I was in trouble and if I did not stop there was a big cliff coming up, so I tried to dig in as much as I could."

When he finally came to a stop at the bottom of the west face, he was fairly certain he had broken bones.

He believed he would not be alive today if it were not for the quick response of the Wanaka search and rescue alpine team.

"I was aware of my knee and the back of my legs and I thought I had broken both legs.

"Hypothermia can kick in fairly quickly when someone's injured and I was thinking ‘If I don’t get off this mountain soon I will die’."

Mr Hoare said his friend saw him fall, skied down to the glacier and pressed the button on their personal locater beacon.

He wrapped Mr Hoare in an emergency blanket and spare clothing to keep him warm, and gave him first aid until the helicopter arrived.

Mr Hoare said he was grateful to Wanaka Search and Rescue team members Gary Dickson and Lionel Clay, who were there within 40 minutes of receiving the call, and the nurses at Dunedin Hospital who he described as "awesome".

Mr Hoare said he was an experienced rock climber and had scaled many mountains but had not had an accident before.

Reflecting on his experience, he would not have done anything differently, he said.

Mr Hoare was a glacier guide before the Covid-19 crisis and when he recovered from his injuries he planned to return to mountain climbing but would "definitely be giving skiing a break", he said.