Group working to bring bird back from Brazil 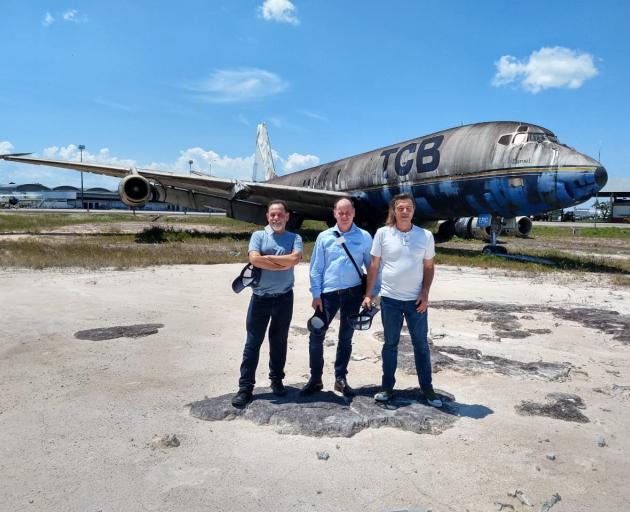 Wanaka Transport and Toy Museum owner Jason Rhodes (centre) in front of the former Air New Zealand DC8 airliner, with Bring Our Birds Home founder Paul Brennan (right) and Brazilian representative Cesar Nogueira. PHOTO: SUPPLIED
It may be in Brazil covered in grime, with birds nesting inside it, but a derelict DC8 aircraft could be destined for display in Wanaka.

The aircraft, which Air New Zealand once used to fly passengers around the world 270 at a time, is sitting on grass at Manaus International Airport in Brazil.

Members of the Bring Our Birds Home group trying to rescue it are in Brazil holding talks with airport and aviation authorities.

Group member and Wanaka Transport and Toy Museum owner Jason Rhodes said last week the value of the visit was in meeting authorities face-to-face to show they were serious about the venture.

"We're over here to try and just smooth the way and let them know everything's very serious our end."

Mr Rhodes said those they had met were happy for the aircraft to be taken away.

"But there is a whole course of legal things you've got to tick along the way. It's not just as simple as it looks."

While there was still much work to do before the aircraft was shipped back to New Zealand, the group had been given an undertaking it would not be disposed of in the meantime.

It has been parked at the airport since part of its undercarriage collapsed in 2004 during a heavy landing; its owners at that time went into bankruptcy soon after.

"The actual metal work and everything is in remarkable condition. It just doesn't look pretty on the outside."

Mr Rhodes said they had looked at numerous ways of getting the plane to Wanaka.

"It's just a large job and it's got to be tackled in a certain way."

The group is also working on plans to bring to Wanaka other former Air New Zealand planes including the Lockheed Electra turboprop which brought The Beatles to New Zealand on their 1964 tour.

Good on them I reckon.
There is some of our history right there.