The growing number of residents and tourists has meant at times traffic on Wanaka’s Ardmore St has to slow to a crawl. Wanaka ward councillor and Queenstown-Lakes district deputy mayor Calum MacLeod wants residents and the council to consider making part of the street car-free. Photo: Tim Miller.
Wanaka is busier than ever with traffic jams, queues, parking issues and people everywhere. Tim Miller asks if the town is in danger of becoming a victim of its own success.

Calum MacLeod has a surprising answer for people in Wanaka when they tell him they do not want the town turning into another Queenstown.

"My response is ‘get used to it because that’s where we are going’."

Like its bigger neighbour over the hill, Wanaka is starting to feel the strain of increased tourism and rapid development but the Wanaka ward councillor and Queenstown-Lakes district deputy mayor does not see the town’s future following the same path. 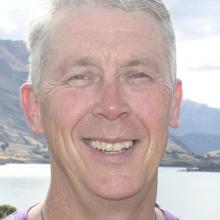 Calum MacLeod.
"Our challenge as a town and as elected officials is to help Wanaka to double and then double again while at the same time retaining that character which is why so many people want to live and visit here."

A lack of parking, traffic congestion on Ardmore St, long waits for boat ramps and walking and biking tracks at capacity were just some of the issues Wanaka faced, he said.

Cr MacLeod said he looked at the development of Queenstown and Wanaka as a story of two fashion models, male or female, who started off together but went their separate ways.

"Queenstown took off and was on the front cover of magazines and at parties living the dream and now it’s needing a little bit of botox here and there to keep up the appearance."

"While in Wanaka we haven’t had the same popularity but we still have that amazing bone structure which we can build on now were are becoming more and more popular ."

As each month passed it seemed the  record for visitors to the town was broken again  and Wanaka’s rise in popularity  showed no signs  of slowing.

"You just have to look at Roys Peak — it kind of caught everyone off guard and we were really the victim of our own success there."

After being heavily promoted on social media, the popularity of the Roys Peak track has surged in the past two years.

The Department of Conservation has  doubled the size of the parking area at the track but during busy times there are still not enough spaces and so the sides of Mt Aspiring Rd are also used as unofficial parking spaces.

A counter was installed on the track only in November so there were no exact numbers on how many people were using the track.

On another popular walking track, to the Rob Roy Glacier in  Mt Aspiring National Park,  the number of hikers increased from 25,200 in 2013-14 to 32,000 in 2015-16Tourists would continue to flock to the resort  so issues such as public toilets, parking and traffic congestion needed to be addressed as soon as possible, Mr MacLeod  said.

"At the base level I think we are doing really well."

"It’s the stuff on the edges really ...  the parking, the tracks, the traffic, where people are starting to see the strain on the town."

Now was also the time for the council and residents to think big and come up with ideas which would shape the town for the next 30 years.

I am a homeowner in Wanaka. Our beautiful town is changing somewhat. I do not like this change. My reaction is one of wanting to flee.