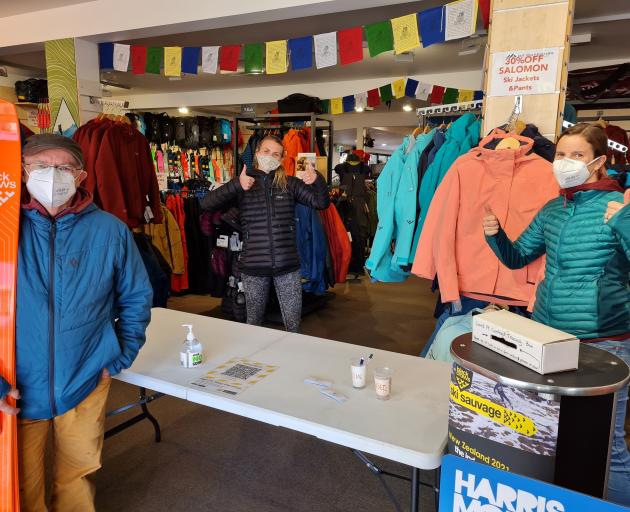 MT Outdoors owner Steve Hart (left) and employees Mima Kowalczyk and Charlie Palmer cannot wait to hit the ski slopes in Alert Level 2. The Wanaka outdoor gear business has been open during Alert Level 3, but customers are not allowed in the store. PHOTO: MARJORIE COOK
Queues of customers were forming outside Wanaka outdoor equipment shops, cafes, optometrists and pharmacies during the first day of Alert Level 3 restrictions on Wednesday.

The slightly less rigorous trading conditions drew many people to town, but customers were not allowed in the doors of shops that had opened. Many shops remained closed.

MT Outdoors co-owner Steve Hart said his first visitors included a policeman, who assisted with the correct desk and equipment placement at the entrance to his store, and his first sale was to a climber who wanted chalk for some home-based activity.

"He said he was climbing up the wall. He’s got kids," Mr Hart said.

Mr Hart is a keen mountain enthusiast and very worried for his friends who have had to put their guiding companies into hibernation over the past 18 months.

"We are OK because we are trading in products that people want. But they also want to go out and have adventures. I would say they are essentials. They might not fit the Government definition of essentials, but they are Wanaka essentials," he said.

He and his staff had their fingers crossed the South Island would move to Alert Level 2 next week, so people could enjoy some spring skiing.

"We missed what was a very good August. It is now the worst August since 2010," he said.

There had been good communication between local businesses, and the feeling was that the economic impact might not be as bad as it was last year, he said.

"The Government wage subsidy scheme has been a godsend for my staff. I have come across some negative comments and I just don’t think they are appropriate. There are so many people dying around the world and I think some people just need to chill out," Mr Hart said.