Long wait for home worth it for family

It took 10 years, but the Vaughs are in an affordable home.

After many years’ dreaming, it was made possible through the Queenstown Lakes Community Housing Trust’s assisted home ownership model, Secure Home.

‘‘We were told it would not be your typical house-buying process. We had a bank to choose. A bank. SBS is the only bank that works with the trust at the moment,’’ Mr Vaugh said. 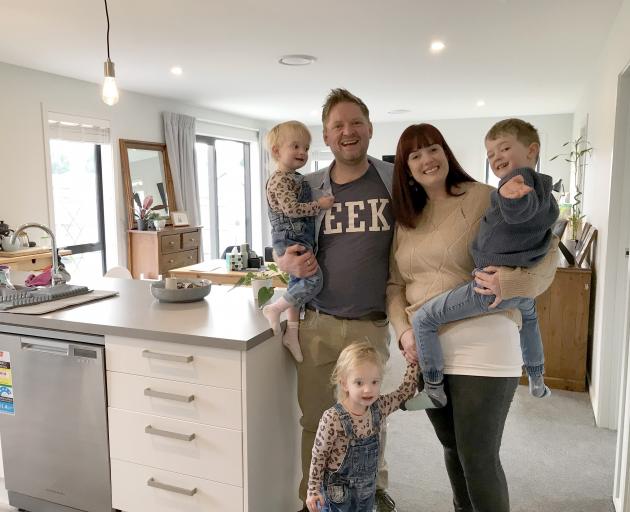 A friend invited them to Wanaka about 10 years ago.

They found hospitality work and a Warren St rental for about $370 a week.

The Auckland landlord was a fair man who put the rent up just once — by about $20 — so they stayed put.

‘‘Our landlord put double glazing in, got the carpets changed. Warren St was very convenient.’’

When the children came along, they noticed beautiful million-dollar houses were popping up around them, without families in them.

Where were the children? At Hikuwai.

Mr Vaugh is the family breadwinner. Mrs Vaugh left her job at Kai Whakapai Cafe to look after the children and recently founded a home-based business, Village Gifts, selling at markets and online.

The girls’ arrival was a good-news story, not just because they were rare monoamniotic (‘‘Mo-Mo’’) twins and survived pregnancy, but because they enabled the family to get a house.

The couple could not get on the affordable house waiting list when Rory was a baby, because both worked full-time.

‘‘Now we had two more children and one less job, so they were like ‘Right, you are in’,’’ Mr Vaugh said.

To buy a four-bedroom house with a garage for under $500,000, they raised a 20% deposit, including their KiwiSavers.

They took out a 100-year lease on the land (about 520sqm), which costs about $100 a week, separate to mortgage payments.

They also got a Government first-home grant.

The couple say that was lucky. First-home grants are quite hard to get in Wanaka because they are capped at $650,000.

The monthly median sale price for a Wanaka house this year has been between $900,000 and $1.1million.

‘‘Because we were only buying the house, not the land, we got it,’’ Mr Vaugh said.

The couple cannot benefit from increases in capital land value but they can live in the house ‘‘forever’’.

If they sell, their inflation-adjusted investment is returned and the home goes to another applicant.

‘‘We have lived in a few places around the world, and home is the happy place where you want to stay. It is about family now, the children, bringing them up in a safe place like Wanaka,’’ Mr Vaugh said.

Queenstown Lakes Community Housing Trust executive officer Julie Scott said there was one affordable house left in the Hikuwai block (two bedrooms, $392,000) and a decision on the occupant was due soon.

There are 150 people on the Wanaka waiting list and 10 homes to be built at Northlake next year.

The trust also expects titles to 28 sections from Longview, Lake Hawea next year, and eventually a total of 60 Longview sections.

The trust has provided 40 affordable homes in Wanaka, through various ownership and renting models, since 2007.