By Marjorie Cook
0 Comments
Everyone has their Everest, everyone deserves their chance to stand in sunshine.

Wanaka’s Ben Suncin has more challenges than most, following a life-changing head injury caused by a medical misadventure during surgery in 1999.

But the former Wanaka THC worker was in fine form just after 1pm on Tuesday as he walked around Pembroke Park.

Mr Suncin had set himself the challenge of walking around the Wanaka park for 12 hours.

By halfway he had already surpassed his goal of raising $1500 for the Otago Brain Injury Association.

Mr Suncin is a regular volunteer at Challenge Wanaka, Relay for Life and other community activities.

"Whatever appeal is happening, I am into it," he said.

Last year, he had been "walking around in one big circle" at the Relay for Life, an event to rally support for people with cancer, when he decided to do a similar adventure for the Brain Injury Association, because it had been there for him through thick and thin.

"ACC said they would help put me through the exercises if I would have a go [at Relay for Life]. I love walking," Mr Suncin said. 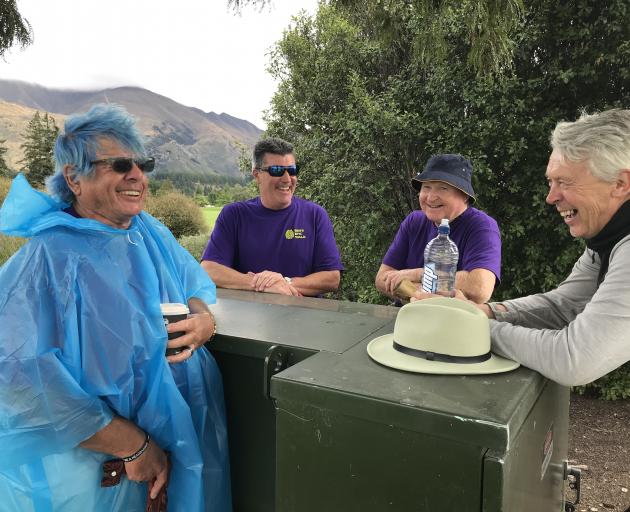 Sharing a joke during a 12-hour charity walk around Pembroke Park on Tuesday are (from left) Wanaka charity fundraiser Ben Suncin and friends Brett Jenkins, Rob Luke and Calum MacLeod. PHOTO: MARJORIE COOK
"It was absolutely beautiful, especially the memorial walk where they had the candle lights going. It started to drizzle and I thought, ‘tears from heaven’.

"I did cry, and I was glad I did because it let out a lot of emotions."

During his 7am-7pm walk, Mr Suncin talked about many things, including his blue hair, the need for spare doggie-doo bags, his disappointment that tourist trains did not get better support from territorial authorities and his goal of climbing Mt Iron or Mt Roy again one day — "and then I will get someone in a helicopter to bring me down".

Each lap of Pembroke Park took him 29 minutes.

He was no stranger to a big day out, despite his health issues.

"With Challenge Wanaka I would have started at 5am and gone through until 1am the next day," he said.

Covid-cancelled events meant he would not be able to do as many things this year, but he was looking forward to a trip to Dunedin next month to participate in Brain Injury Awareness day activities.