The council announced yesterday it had taken up a "once-in-a-generation" opportunity to buy 67ha on the north, west and southern flanks of the Mt Iron, plus 27ha on Little Mt Iron.

The land would be held in reserve for the community, while the owners, the Cleugh family, would retain 22ha of the former farm.

The Department of Conservation already owned a reserve on Mt Iron and administered a popular 4.5km walking track to a lookout at the top.

The council was negotiating with Doc about combining both reserves into one council-owned entity.

Mt Iron was bought from Welshman Bertie Reece by Laurie and Brian Cleugh in the 1960s as a farm.

Councillors voted unanimously at yesterday’s full council meeting to buy the land and act as guardians.

The purchase is now subject to final due diligence. 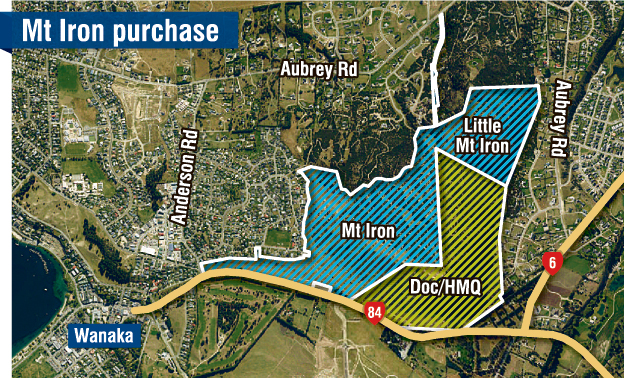 Both parties had spent about 18 months negotiating.

Cr Quentin Smith, of Wanaka, said he was incredibly excited such a loved part of Wanaka was coming into public ownership.

"Opportunities like this come along maybe once in a generation. With increasing development pressure around the district, reserves and open spaces have never been so important for community wellbeing.

"Up to 180,000 people a year currently use the existing tracks and council’s purchase will open the door not only to a whole range of potential activities like new walking and biking trails but also improved opportunities for active transport routes near the state highway, biodiversity improvements and the ongoing protection of this land from development.”

Lynden Cleugh said his family had long seen themselves as guardians of a very special property.

"We’ve resisted many approaches to develop and commercialise Mt Iron since Laurie and Brian Cleugh bought it in the early 1960s ...

"Since then we’ve spent countless hours keeping the property free of weeds and wilding pines while maintaining a long-term vision that Mt Iron should at some point be managed on behalf of the community," Mr Cleugh said.

"That way everyone can enjoy this special place in the middle of our growing town."

Allenby Farms Ltd first publicly indicated its intention to create a legacy for Wanaka in a submission to the proposed district plan in 2017.

Mr Cleugh told commissioners then that in an ideal world, the whole of Mt Iron, Little Mt Iron and the Doc estate would be council-managed and -owned.

A shepherd and dog sculpture at the start of the Mt Iron walking track commemorates the district as the location of the world’s first recorded dog trials.