Released on social media yesterday was this photograph of Richie McCaw and Gemma McCaw (nee Flynn) in Wanaka with a caption which read "Awesome to wake up on our first day as Mr and Mrs McCaw." Mrs McCaw is wearing a Camilla "Love Weave" minidress.
Unless you spent the weekend under a rock, you might have heard there was a wedding in Wanaka.

After a week of intense speculation former All Black captain Richie McCaw married New Zealand hockey player Gemma Flynn in front of about 80 friends and family at the Olive Grove venue overlooking Lake Wanaka on Saturday. 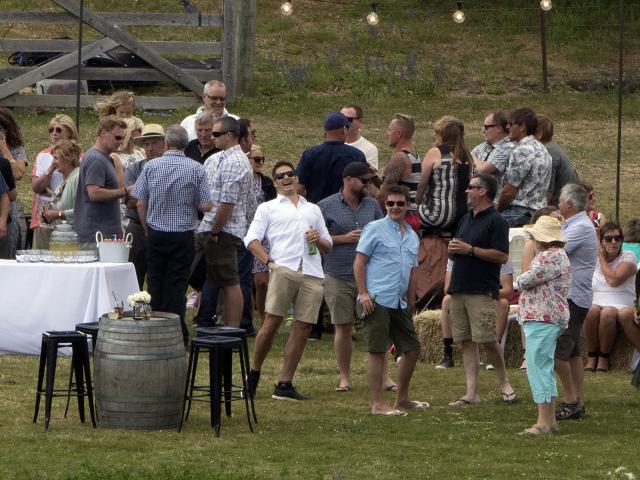 Security was almost at a presidential level on wedding day.  A team of about 20 security guards with radios and binoculars patrolled the venue as well as the roads and walking tracks nearby.

A group of reporters, photographers and cameramen waited outside the venue’s main entrance on Mt Aspiring Rd hoping to see who had made the guest list. Cameras and mobile phones focused on each bus or taxi let through by a security guard who checked to see if everyone  was on the guest-list.

Many guests waved as they made their way in.

Members of the public hoping to see the high-profile couple joined the waiting media.  Amanda Dallow and her children were on holiday in Wanaka and wanted to catch a glimpse of the couple and their more well-known guests.

Her two sons Max (14) and Gus (9) saw McCaw the day before on the Wanaka Golf Course. An Australian freelancer who had flown to New Zealand on Saturday morning to cover the wedding was surprised there were not more media outlets covering it.

As the ceremony began, attention shifted to the Millennium walking track where a view of the wedding could be seen about 300m away.

Security guards used clothing and umbrellas to block the views of  photographers and cameramen as they tried to get a shot of the star-couple.

Police were called to the track just after 3pm after an incident involving a journalist and a security guard.

It is understood a weekly magazine has bought the exclusive rights to the wedding for what has been reported as a six-figure sum.

In Wanaka yesterday, most people were more concerned about finding a car park than the nuptials which had taken place the day before.

People in Wanaka spoken to by the Otago Daily Times were happy for the couple, but thought the media coverage had been a bit over the top.

The McCaws own a house in the town and are often seen grocery shopping or at a cafe, with little fanfare.

The couple shared a photo of themselves on their first morning as Mr and Mrs McCaw to Facebook and Instagram.

Snippets reported by various media over the past two days included:

• Rob Nichol from the NZ Rugby Players’ Association also attended, as  did members of the Black Sticks, including Rose Keddell.

• McCaw wore a dark suit with a black bow tie and a white floral buttonhole.

• They continued the celebrations yesterday, with an "after function" at the Olive Grove.

• The rights have been sold to Woman’s Day.