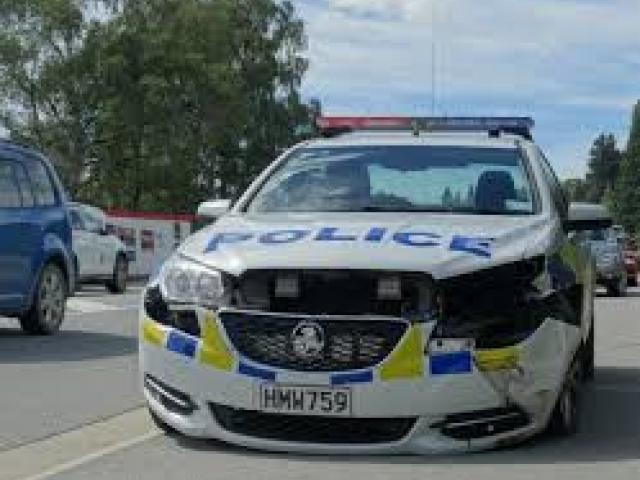 A police car was rendered inoperable after being rammed during the incident. Photo: Sean Nugent
A former Queenstown man who sparked a police pursuit after speeding through roadworks on the Crown Range had just come off a methadone programme, his lawyer says.

Sean David Thomas (30), a gib stopper now living in Christchurch, sped through the speed-restricted roadworks near the summit of the Crown Range road on the morning of December 3.

Over a distance of about 500m, he knocked over 70 to 80 road cones and veered into the wrong lane, forcing a road worker to leap over the barrier.

He continued driving towards Wanaka at speeds approaching 170kmh while refusing to stop for police.

Appearing in the Queenstown District Court this week, Thomas admitted charges of reckless driving, possession of cannabis, assaulting a constable, failing to stop and wilful damage.

His lawyer, Bryony Shackell, said Thomas was suffering from a ‘‘serious mental health episode’’ after coming off a methadone programme ‘‘more hastily than he should have’’.

He was in hospital for a week after the incident.

Prosecutor Sergeant Ian Collin said Thomas continued driving into Wanaka, where he stopped in the middle of the road near the intersection of McDougall and Upton Sts.

He got out of his vehicle and made threatening gestures to police before getting back in.

Despite a patrol car attempting to block him, he avoided it by mounting the kerb, colliding with a second patrol car so violently to make it inoperable.

He then drove along Wanaka-Mount Aspiring Rd towards Glendhu Bay with three patrol cars in pursuit, continuing to ignore their lights and sirens.

He frequently crossed the centre line and gestured at the officers.

At the approach to a one-way bridge, he drove over police-laid road spikes, causing the two front tyres to deflate and forcing him to stop after a further kilometre.

He was ‘‘angry and aggrieved’’ while being arrested, and spat in the face of an officer.

Cannabis leaf was found in a bag in the vehicle.

While in a cell at the Wanaka police station, he ripped a mattress.

Judge Bernadette Farnan said the behaviour was ‘‘outrageous, irrespective of whether he was unwell or not’’.

She convicted him and remanded him for sentencing in the Christchurch District Court on May 28.

She requested pre-sentence and reparation reports.