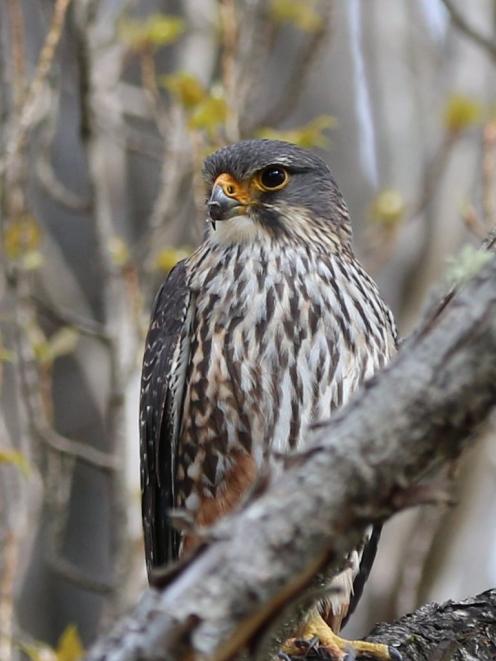 The birds can become aggressive during breeding season and it is for that reason the Albert Town end of the Upper Clutha Track near Wanaka is closed for the coming weeks to protect both the nesting pair and passersby.

The pair have claimed a territory near Pawson’s Crossing and are believed to be the same pair that successfully nested there last year.

Department of Conservation ranger Caroline Ogle said it was great to see threatened species making a home in the area, but during breeding season, the birds of prey could become aggressive if threatened.

"Human health and safety-wise this pair are already quite vigorously defending the territory around their nest, dive-bombing walkers who get too close.’’

"They have quite sharp talons so this can cause lacerations to people and dogs.’’

Pairs that were regularly disturbed could get more aggressive over time, and it could lead to females abandoning their nests, Ms Ogle said.

"There is also a risk the karearea can injure themselves — if they strike a cyclist’s helmet they may render themselves unable to fly or defend themselves against predators who are happy to make a meal out of them and their chicks."

Karearea were native to New Zealand and found nowhere else in the world and were the country’s most-threatened bird of prey, Ms Ogle said.

They nested during spring and summer, usually on the ground in a nest scrape.

Chicks stay in the nest scrape until about 28 days old, she said.

"Try to stay clear of nesting falcons, but if they start to dive-bomb turn around and go back in the direction you came from.

‘‘If you have a hat, or are wearing a hoodie, put that on and hold a soft, bushy branch of vegetation above your head. The birds normally only attack threats to their nests in an approximately 60m radius."

The outcome of the Albert Town karearea pair’s nesting attempt is being monitored for Doc and the Queenstown Lakes District Council by The Karearea Project.

It is included in its Cardrona Valley karearea project.

Last year, this pair were the only successful breeders of those monitored in the greater Cardrona Valley area.

Doc, with the support of the QLDC — which is responsible for maintaining the Albert Town Reserve — had signposted the area, warning users to steer clear.

The warning is anticipated to be in place until December.

"The best thing for everyone, humans, dogs and birds, is to give this pair the peace and privacy they need so we can all get through the breeding season unscathed," Ms Ogle said.