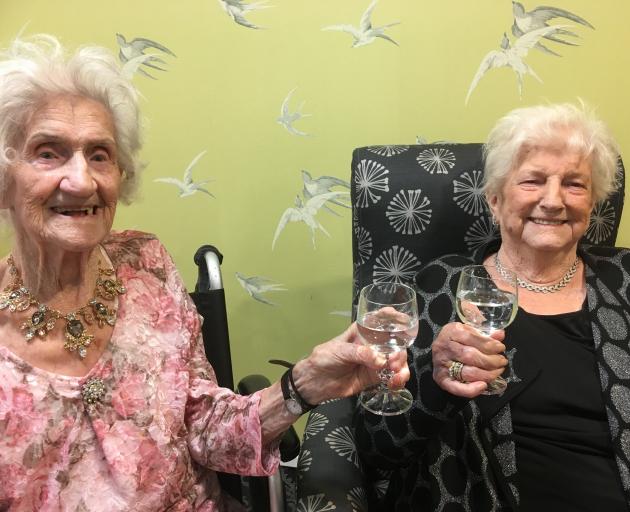 "I can't understand it myself," Mrs Cruickshank said, when asked what she thought her secret to longevity was.

Although she believed not smoking might have had something to do with it.

"I never did anything wrong," Mrs Halloran said, when asked the same question.

"We lived simple, to a point. We weren't wealthy. Our mother looked after us very well, but we only had the basics," Mrs Halloran said.

The pair share a strong sisterly bond, which has continued in the hallways of Elmslie House rest-home, where they both reside.

They joke about their attempt to outdo each other, both of them having suffered a broken hip in the past six months.

Mrs Halloran also added a fractured pelvis to the mix, but both sisters have bounced back and are in good health.

Neither of them received a card from the Queen this year, but the question prompts discussion about Mrs Halloran's long list of royal encounters, including the time she met Prince Philip, Prince Charles and Princess Diana.

She also had a close encounter with Queen Elizabeth during her royal visit to Invercargill in 1954.

The sisters' parents had seven other children. Mrs Cruickshank is the third oldest and Mrs Halloran is No 5.

Mrs Cruickshank spent her younger years as a hospital technician and married the late Cyril Cruickshank.

They had two children and lived in Mataura.

Mrs Halloran worked as a nurse aide at Kew Hospital in Invercargill under "manpower" regulations during World War 2 and married the late William Halloran.

They had six children and lived at Wreys Bush.

Mrs Halloran and Mrs Cruickshank will celebrate their milestones with family and friends during a gathering this weekend.