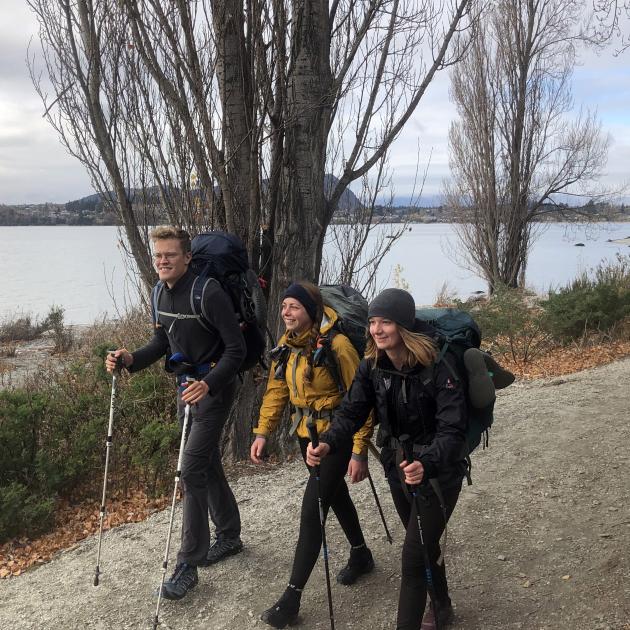 Te Araroa Trail trampers Lukas Waser (21), of Switzerland, and Alexandra Hog (28, centre) and Katrina Steiert (28), both of Germany, on their first day back on the trail after spending the Covid-19 lockdown in Wanaka. PHOTO: KERRIE WATERWORTH
Having to wear winter clothing was the main difference for three international tourists who resumed hiking the Te Araroa Trail following their unexpected seven-week break in Wanaka.

Alexandra Hog and Katrina Steiert, both of Germany, set off from Cape Reinga at the end of October and Lukas Waser, of Switzerland, joined them in Havelock.

On Thursday, March 26, the trio reached Breast Hill, a day and a-half’s walk from Wanaka overlooking Lake Hawea, where they had cellphone and internet coverage for the first time in days.

Mr Waser said there had been about 40 Covid-19 cases in New Zealand when they set off from Twizel but they discovered there were now more than 200 and the country was about to go into the Level 4 lockdown.

Ms Steiert said they rang the Wanaka Base backpackers hostel to find out if they could stay for the lockdown period and were told they could but they had to arrive by a certain time the next day.

"We were the last ones in. We’d had to walk very fast and it was a very long day, but we were lucky we made it to the hostel before it closed," she said.

They spent the first few weeks cooking and eating a lot as they had just come from the trail and were "very hungry", but then it started to get boring.

"We were used to walking 20km or 30km every day and suddenly we could only sit down, play cards or do nothing and self-isolate in our small shared room, so it was very hard."

The trio were the first to rejoin the Te Araroa Trail out of Wanaka once the country moved into Alert Level 2 but not before rebooking airfares and buying woollen hats, jumpers and bedding.

Mr Waser said they had planned to arrive in Bluff by the first week in May but were now hoping to arrive before the snow came.