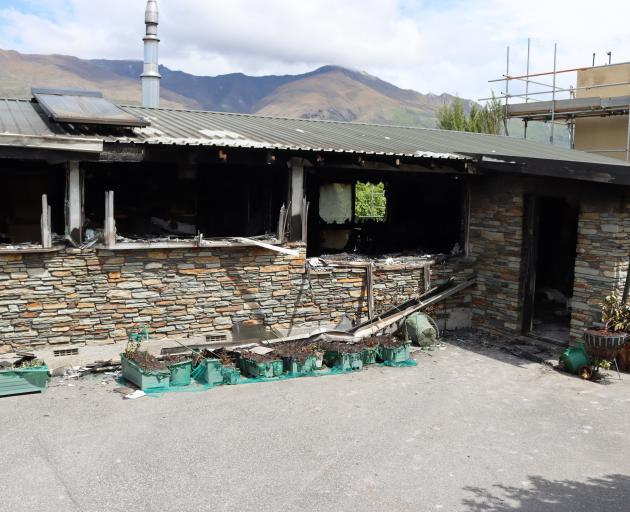 A house was substantially damaged by fire on Friday night. PHOTO: FENZ
The retired owners of a Wanaka house damaged by an accidental chip pan fire last Friday have thanked the fire service, community and family for support.

Phil Thirkell said his wife Helen had been slightly burnt and had cuts to her head from breaking glass.

They had also lost a lot of personal possessions after their living room and the top storey of their house was "wiped out".

But they had escaped with their lives and were being "well looked after", he said.

"It was so dramatically fast. We didn’t get much of an opportunity to save anything. We saved ourselves first. It is so hard to do but we were told that was the right thing to do," he said.

Mrs Thirkell received medical attention at the scene and at the Wanaka Medical Centre and was fine, Mr Thirkell said.

The couple are now staying at a friend’s house in Wanaka while the mess and the insurance is sorted.

Mr Thirkell said their sons had dropped everything and come straight to Wanaka from Invercargill and Wellington to help.

"We are getting a lot of help from professional people and tremendous support from family and friends."

Flames from the fire were visible from the town centre and the building was well alight when the Wanaka Volunteer Fire Brigade arrived about 7.30pm on Friday.

Brigades from Luggate and Lake Hawea were also called .

Invercargill-based fire safety investigator Murray Milne-Maresca inspected the house and said the brigades had used good firefighting techniques to contain the blaze to the upper level.

Mr Milne-Maresca stressed the fire moved quickly, it was easy to become distracted when cooking and the Thirkells had done the right thing by getting out.

The Thirkells purchased the house in 1984, after moving to Dunedin from the United Kingdom in 1983.

The house was a holiday home before it was rebuilt in 2000. The Thirkells retired to Wanaka fulltime in 2005.