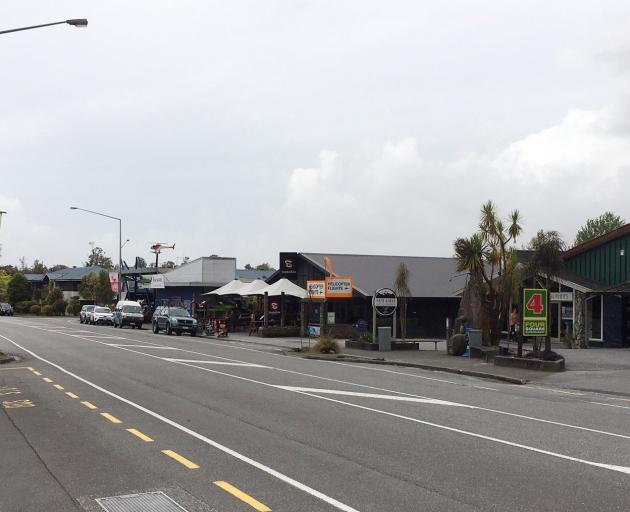 A deserted Franz Josef main street. PHOTO: SUPPLIED
Tourism Minister Stuart Nash will be in Franz Josef next Tuesday where he will see a town fighting for its survival, writes Laura Mills.

A new report - released yesterday - conducted post-Covid confirms that more than 500 jobs have already been lost in the West Coast glacier region, and 184 more are under threat.

The findings have been sent to Mr Nash, who is being asked to release $34.9 million in help.

The key findings are:

• At least 53 businesses and an additional 184 jobs will probably be lost in the next six months if there are no changes.

• Businesses are operating at 20% of their normal capacity (on average).

• At least 25% of the population has left, at least 38 community volunteers have probably been lost and Fire and Emergency services are short-crewed 55%-75% of the time.

• GDP contribution is forecast to be down by $382.1 million over the next four years.

The report also found 19 pupils possibly have been lost from schools, and 264 people have moved out of South Westland as they no longer have jobs.

Businesses told the report authors their cash from the last season had been exhausted.

One had put in more than $100,000 of their own money to keep the business going this year.

Some said their businesses would close by April if there was no assistance forthcoming.

"What can we possibly do? Tell me how we can ‘pivot’ when there is nothing to pivot to?" asked one.

Mr Nash voiced his concerns about the area yesterday.

"I don’t think we’ll let them die but I am well aware that Covid is having a significant impact on the viability of many businesses there.

"But what I am really keen to do when I am down there is sit down, one-to-one, talk about the issues, see what we can do to help in the long term because this isn’t going to be something that can be solved overnight if we make an assumption that the borders won’t be open before next year."

As well as meeting residents, the minister would see first-hand the Waiho (Waiau) river, and site of the proposed $24million floodwalls.

The Government was taking a second look at the promised floodwalls, while West Coast councils had urged it to honour the commitment so work could start immediately.

Mr O’Connor said Mr Nash might give an indication on that project while he was at Franz Josef.

The West Coast MP also said he had held brief discussions with Development West Coast about it stepping up with funding.

"DWC has a lot of funds for West Coast development."

He said DWC was set up to help transition the region’s economy away from native logging to new industry and the challenge facing South Westland now was far bigger than then, he said.

Tax relief is one possibility for Government help.

With provisional tax bills due shortly, based on last year’s income, Mr O’Connor indicated that help could be on the way.

That could be done simply through IRD.

He would go back to Revenue Minister David Parker and remind him that flexibility should be provided.

DWC chief executive Heath Milne said DWC would offer loans to glacier businesses if the Government agreed to underwrite them.

"We are very conscious that the banks are not willing to help lend (in the glaciers), despite the Government business funding guarantee scheme, to underwrite 80%.

"We have requested the Government underwrite DWC to make these loans," Mr Milne said.

Mr Milne stressed that the release of the economic report yesterday was about trying to keep the community alive.

At one business alone, staff had taken a 50% pay cut to help the business stay afloat.

The report said the personal toll of the Covid economy was widespread.

"The stress and mental health state of fathers, mothers and children is very concerning.

"It’s hard to watch families not having enough money to feed their children. There is no alternative for these families."

The $400 million Tourism Recovery Package included direct support to Glacier Tourism businesses and tourism promotion organisations on the West Coast, such as interest-free loans; Jobs For Nature, and the new resurgence payment to compensate for loss of revenue following alert level changes.

Support was also being introduced for much-needed West Coast infrastructure through the Provincial Development Unit.