The Lake Dunstan triathlon event kicked off at McNulty inlet yesterday. Photos: Adam Burns
It was a clean sweep for the Staufenberg brothers of Wanaka during yesterday’s Lake Dunstan Triathlon and Multisport race.

The trio of brothers blitzed a ‘‘competitive’’ field in the triathlon sprint open men’s category, securing the top three spots.

More than 200 competitors lined up for the event, which is part of the annual Cromwell summer series.

Janus Staufenberg kept his two brothers at bay as he finished in a time of 52min 57sec. 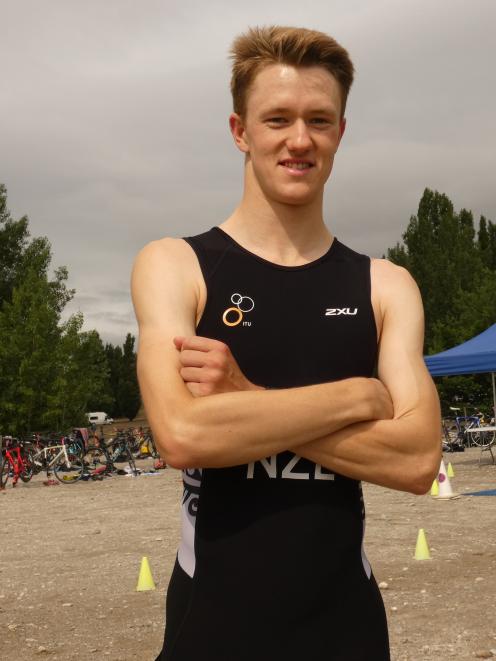 Wanaka triathlete Janus Staufenberg was all smiles following his win in the triathlon sprint yesterday.
‘‘It was pretty chilly that water ... before I knuckled down on the bike and blasted the run.’’

He is now looking forward to carrying the same rapid form into next month’s Oceania Championships.

Three minutes back was Leo Staufenberg, who crossed the finish line in a time of 55min 32sec, five seconds faster than Julius Staufenberg.

Invercargill’s Olivia Thornbury backed up her win from last year by winning the open female category, gliding in with a time of 1hr 1min 34sec, four minutes ahead of fellow Southlander Julia Hunt.

Thornbury said it all ‘‘played out well’’ despite challenging conditions on the bike leg.

‘‘It was a bit of a wind on the way back on the bike which was a bit tough.

‘‘I just kept going and used some of those boys to keep me on pace.’’

In other results, the fastest man in the multisport kayak was Jonah Belk, of Gibbston Valley, in 1:19:39, alongside Alex Nichol, of Queenstown, in 1:31:56.