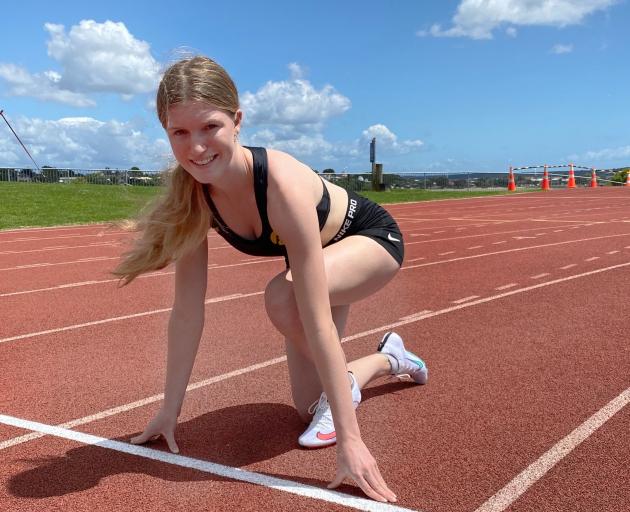 Mount Aspiring College sprinter Abby Fisher as she gets ready for the national secondary schools athletics championships at the Tauranga Domain yesterday. PHOTO: SUPPLIED
Travelling to compete adds an extra challenge for most athletes.

For Abby Fisher, it is just another day.

The 16-year-old sprinter and her mother have got to know the road between Wanaka and Dunedin very well in recent years.

They travel to Dunedin on Friday night, to stop Fisher’s legs getting stiff, and stay the night before heading home after racing at the Caledonian Ground.

It is something they have done every couple of weeks for several years.

Tauranga is a bit further for the Mount Aspiring College pupil to go.

But she will certainly feel a little more comfortable than most who travelled to the national secondary school championships, which begin today.

In fact she said going further was a bit more exciting — she got to go to an airport rather than just getting in a car.

The travel has all been worthwhile, too.

Fisher has put together an increasingly impressive sprinting CV.

Her personal bests of 12.54sec and 25.40sec compare well nationally.

She has proven to be capable of performing on the big stage, too.

Notably, at the secondary schools national championships she has claimed six medals over the past two years.

Two years ago in Dunedin she claimed a bronze in the junior 100m, while her Mt Aspiring relay teams added silver and bronze in the 4x400m and 4x100m respectively.

Last year she won bronze in the 200m, while the relay teams both claimed gold.

This year she will compete in the 200m and both relays again, although will step up to the senior grade.

That will be a challenge, although Fisher was hopeful the big meet would bring out the best in her.

"I do thrive under pressure," she said.

"I’m pretty good at calming myself down before races, and I’ve been to nationals quite a few times now.

"I’m quite used to all the people, the pressure of racing.

It was Fisher’s coaches, Michael and Barbara Beable, who helped transition her into the sport.

She began when she was 12, following a friend into it.

That began as once a week, before Michael scouted her and she started taking it more seriously.

It was not a case of starring straight away, however.

"At the start I was pretty bad.

"Then all of a sudden one day I did a race against one of my friends, who was quite fast back then.

"I ended up beating her.

"It was kind of weird, then I just kept on beating people.

"It just happened kind of naturally."

It was something she hoped to continue with, too.

Next year will be her final year at school and she was looking into the possibility of getting a scholarship to run and study, either in New Zealand or overseas.

Fisher is part of a talented crop of Mount Aspiring athletes at the event.

Joining her in the 4x100m relay team are Georgie Bruce, Niamh Townsend and Millie East.

Estelle Gellatly will run with Fisher, Bruce and East in the 4x400m race.

The event begins tonight and concludes on Sunday.