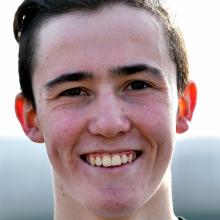 Oli Chignell.
It was a summer that promised fast times.

On Friday night it delivered.

Both the men’s and women’s Otago senior 5000m records were broken within half an hour of each other at the Night of 5s in Auckland.

Both came on a night of fast competition, the men’s field in particular boasting a depth of quality rarely seen in New Zealand.

For Chignell (22), who finished third on Friday, it was his first senior Otago record.

As Tauranga triathlete Hayden Wilde and pacemaker Sam Tanner set a blistering pace, Chignell tucked into the chasing group for most of the way.

They kept a steady pace and, while Wilde coped well at first after Tanner pulled up at 3000m mark, he hit a wall late in the race. 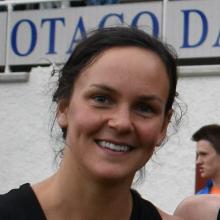 Rebekah Greene
Chignell took the lead in the chasing group and hauled in Wilde down the back straight of the second-last lap.

He was followed by Napier’s Eric Speakman, Tauranga’s Julian Oakley and Egmont’s Matt Baxter, the fastest 5000m runner in the country this year.

Down the final back straight, Speakman lifted a gear and, while Oakley and Chignell tried to go with him, his kick was too much.

Speakman crossed in an impressive 13min 31.84sec, while Oakley followed 3sec back.

The competition clearly aided Chignell, who was pulled along to take 8sec off his personal best.

Greene, who turns 27 next week, put on a gutsy run to shatter a record she had already broken twice.

In January this year, she ran 16min 30.95sec to take 3sec off the mark previously held by Shireen Crumpton.

She took another 7sec off that time racing in Auckland in February.

But the competition delivered by winner Lydia O’Donnell (North Harbour Bays) proved key in pulling her along on Friday.

Greene tucked in behind O’Donnell — and pacemaker Olivia Burden until she fell off — at a sub-16min pace the majority of the way.

That left them comfortably ahead of the rest of the field, but it took until 600m to go for O’Donnell to open a gap on Greene.