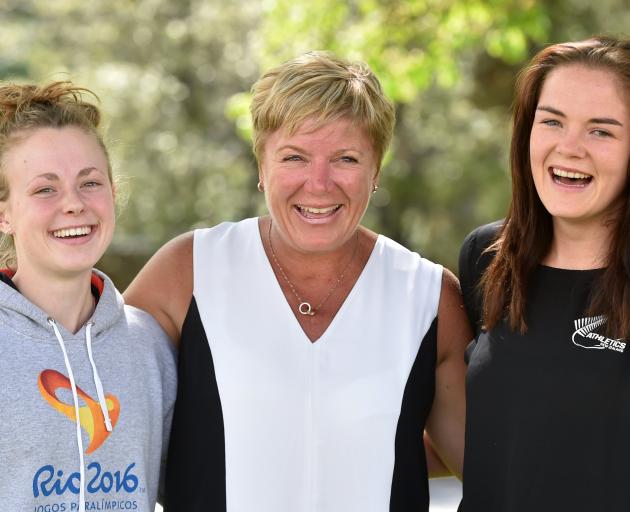 Coach Raylene Bates flanked by two of her most prominent charges, Anna Grimaldi (left) and Holly Robinson, pictured after their return from the 2016 Rio Paralympics. PHOTO: PETER MCINTOSH
Raylene Bates is not the type to seek recognition.

But when you have put as much effort as she has into athletics, a little recognition can make the tough times seem worth it.

"You don’t do anything for rewards and acknowledgement, but it is nice to get that," she said.

"I think the fact who the award was from made it really special. I had so much respect for Arthur as a coach and a person and an administrator."

A former national champion thrower, Bates has been coaching for over 30 years, during which time she has had a hand in guiding countless Otago athletes and operated on the world stage.

For the past eight years, she has been employed as Athletics New Zealand’s para high performance manager.

It is a pedigree that could have led her to bigger places.

Those bigger places — in both New Zealand and Australia — have come looking for her.

But leaving Otago was never a consideration.

"I’m a Taieri girl. It’s about a lifestyle and family and friends.

"My husband’s got a good job as well. Our roots are sort of set here.

"It means a bit more travelling and you have to do things a bit differently. But sometimes it’s actually really good being at the bottom of the earth as well. You just get on and get things done."

Passion for the sport and a drive to want to help people — inspired by her parents and late coach Trevor Bent — were key in helping drive her.

But it was not always easy.

Winter training at the track could be tough and there were countless hours of volunteer work, which could make it tough to separate work and pleasure.

The majority of what she does is volunteer work — of her 14 athletes, she is not paid to coach 10 of them, and the Athletics Otago committees she is on are also voluntary.

She can be at the track three to four times a day in the summer. She describes it as her happy place, but admitted it could become a grind.

"If I said otherwise, I’d be lying. You get tired, you get really tired.

"It’s no different to anyone that’s working. I worked fulltime right up to 2013, 50-60 hours a week in business management. Then coaching on top of that.

"I could never go back and do that again. That just about lost me to the sport.

Yet there were plenty of highlights, not least those Rio Games — where she coached three athletes to medals — and Holly Robinson’s gold medal at Tokyo last year.

However, the smaller stage could also be just as satisfying for Bates; seeing an athlete throw a personal best, or seeing her past charges achieving highly.

It is not something she sees herself still doing in 10 years, but she has her sights set on the 2028 Los Angeles Paralympics.