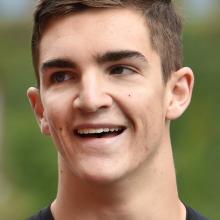 Shay Veitch
Shay Veitch had not won a senior national title when he ran in for his first jump yesterday.

A few hours later he had won two.

The Otago athlete claimed the long jump-100m double at the national track and field championships in Hastings yesterday.

Veitch put on impressive displays in both events, although both were wind-assisted.

Later in the day the 20-year-old added a third medal — a silver in the 4x100m alongside Felix McDonald, Schuyler Orr and John Gerber in a time of 42.32sec.

The long jump surpassed his previous best by 12cm, although with a tail wind marginally too strong for a legal performance.

Had it been wind-legal it would have broken the Otago record of 7.71m.

Three more jumps of 7.70m or further followed, cementing him well ahead of the chasing pack.

That was led by Otago rival and defending national champion Felix McDonald, whose 7.38m was well-clear of the rest of the field to claim silver.

Veitch was quick to credit McDonald, while adding it left him well-placed ahead of next summer.

"This season is a lot of a set up for next season," Veitch said last night.

"I want to push closer to 8m to qualify for the Commonwealth Games.

"I’ve had Felix pushing me all season and he was here today as well."

Less than two hours later Veitch lined up in a 100m field, which had been reduced to a straight final.

But Veitch took full advantage and he powered away with a stiff breeze behind him to claim victory.

Wellington’s Cody Wilson came in second in 10.42sec, 0.08sec back from Veitch.

"My start felt amazing and I didn’t really see anyone the whole race, which is always the goal," he said.

"So I was super happy with that.

"A lot of the good runners in the country aren’t here this weekend, so if there was going to be a chance to take out that title it was today."

While it would be easy to point to the missing names to detract from the title, Veitch’s time of 10.34sec compares well with past champions.

It was faster than Osei-Nketia’s winning times of 10.46sec and 10.64sec from the previous two years.

While it is hard to make a direct comparison — Veitch had favourable conditions — it is enough to show the performance was quality regardless of who was missing.

Veitch has one more race to go today, as he chases a fourth medal in the Otago 4x400m relay team.