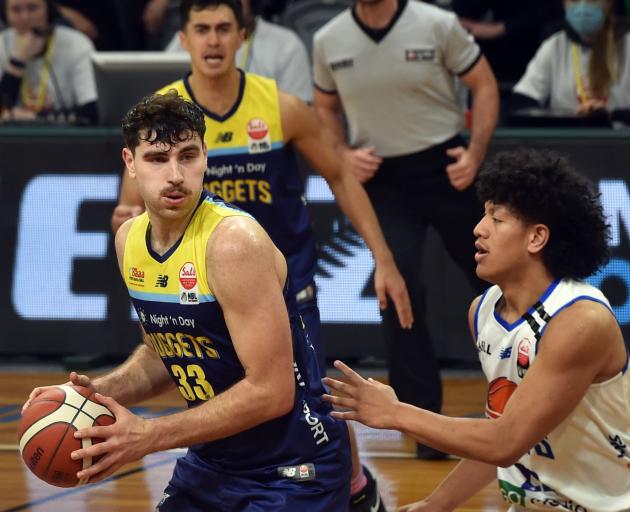 Otago shut down the Wellington Saints’ scoring options and big Sam Timmins got his hook shot going midway through the game to lead the Nuggets to an 83-61 win on Saturday night.

He was unstoppable close to the hoop.

About 1200 fans showed up to see the Nuggets’ first outing at home this season and to see how the trio of America imports would go.

They all got a pass mark.

Todd Withers was solid on defence. He nabbed 10 boards and made four steals and was quietly efficient.

They will get better the more they play together.

But Timmins is the star of this side.

The 2.11m centre had a quiet couple of quarters before exploding in the third quarter. He collected 12 points in a powerhouse performance under the rim.

He backed his way to the hoop, while leaning on his opponents, before swivelling in a hook shoot.

If he got close enough, he slammed it down. It was beautiful to watch.

Taane Samuel got the defensive assignment more often than not. It was like trying to hold back the tide.

"Twenty-six points and, really, he wasn’t troubled too much. He just did his thing."

Withers led the defensive effort, but everyone chipped in. At the other end of the court, there is room to improve.

"I said at halftime we’ve got to learn to connect with each other. This is all fresh and new and there are some bits and pieces we’ll have to work on this week.

"But I’m just really happy the guys really locked in on D. I think it was a great defensive effort in the second half.

Michael Smith led the charge for the Saints with 15 points, and Samuel added 14. Jordan Ngatai was restricted to 11 points.

McCall gets the award for pass of the game. He has some fast wheels and moves a click quicker than anyone else.

Sometimes his new team-mates looked a little bewildered and unsure what he might do next.

But his no-look pass to back-up centre Jack Andrews under the rim was something special. The big fellow popped it in.

Francis Mulvihill hit a three on the buzzer for the Saints to cut the gap to seven at halftime.

The Nuggets pulled away again in the third and outscored their opponent 21-12 in the last period to record a comfortable win.

If the Nuggets can keep defending like that, they will be hard to beat.

But no-one threw themselves into defence quite like Matt Bardsley. He launched himself towards Samuel in an effort to block his shot. The Saints forward faked and then ducked under, but wound up with Bardsley on his back.

A funny moment, but it also summed up the defensive effort.

In the other game on Saturday night, the Franklin Bulls beat the Southland Sharks 79-75. Jayden Bezzant poured in 28 points for the Bulls, while Mojave King scored 25 for the Sharks.

Yesterday, Chris Johnson had 24 points and 15 rebounds as the Auckland Tuatara spanked the Canterbury Rams 84-56, and the Southland Sharks had a convincing win over the Manawatu Jets in Palmerston North, 97-78.