Gore power driver has a smashing time on the green 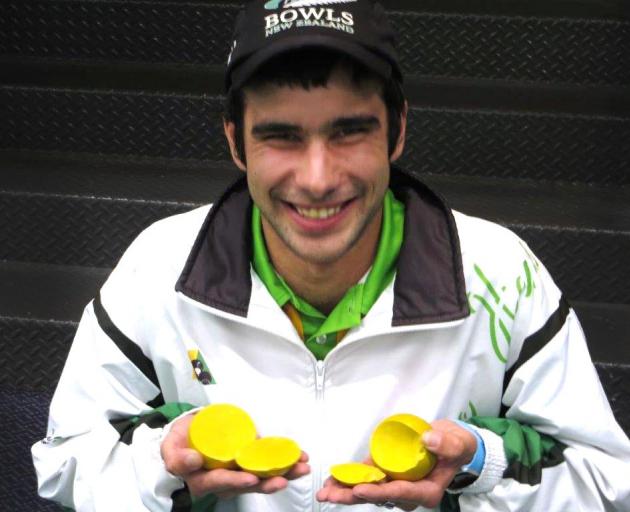 Three regional PBA events have been held at the Dunedin Bowls Stadium this winter and Bagrie-Howley’s first jack cracked when playing Ray Webster.

The second cracked jack was against Helen Carman in the final regional event last month.

Bagrie-Howley likes to drive and has the ability to  put power into his bowl. That  helped win him a silver medal in the mixed pairs at the junior world championships in 2015.

But he does not have the ferocious drive that double World Bowls champion Peter Belliss was noted for in his heyday, when he made it too dangerous for spectators to stand behind the jack.

"I have broken seven jacks and my own bowl in my career," Bagrie-Howley (22), an aviation restoration technician, said.Bob Botting (Caversham) had a large chunk broken off his bowl after a ferocious drive by Neville Hill at the national championships in Dunedin in 1976 and  was forced to play the rest of the championships with a new set of bowls.

It was especially annoying to Botting because the bowls had been purchased by his father-in-law in  Glasgow, Scotland, in 1932.

The ranking singles, the final regional event of the Dunedin PBA year, was won by Oliver Mason who beat his mentor Ken Walker 7-6, 4-9, 2-0 in the final.

Mason (23), a duty manager at Centre City New World, also won a ranking singles at the stadium two years ago.

He emulated the deeds of his twin brother Elliott, who beat international Andrew Kelly in a singles final earlier in the season.

Walker had the unusual experience of having four drawn sets in earlier rounds. Against Duane White the first two sets were drawn 7-7, 7-7 and against Ross Stevens the sets were drawn 6-6 and 7-7. Walker won the tiebreaker 2-0 to win both games.

Robb won his 36th North Otago title when he skipped the winning Eveline team in the champion of champions triples last month. The other team members were Diana McGregor, who won her 18th centre title, and Colin Tipper, with his first.

They beat Barbara Allan, Rosey Oliver and Joan Robb (Meadowbank) in the final.

Robb also won the Henselite singles when he beat Lynne Porter (St Pat’s) and will represent North Otago in the national final in Wellington this month.The leading bowlers from the other centres are Gary Flewitt (Otago, Dunedin) 32, Eileen Grant and Robert Wilson (South Otago) 25, and Mathew Begg (Central Otago) 34.

Flewitt is no longer playing and the leading Otago bowler is international Daniel French who has won 23 titles. The annual Moss Rosebowl district triples  tournament was won by Oamaru.

It was the second title for Johansen, who won his first  in the pairs three years ago, and the first for Lindsay and Dot Watt.

Ev Bisset (Bannockburn)  won her third centre title in the women’s champion of champions singles and Tony Kane (Alexandra) his second in the men’s singles.

Alanna Preddy topped a successful season by being named the South Otago bowler of the year. She scored 38 points and pushed her mother Shona into second spot with 30 points. Chris Moffitt  was third on 26.

One of Alanna Preddy’s highlights was to become the youngest South Otago indoor bowler, at 23,  to win five titles and her centre gold star.

She won three South Otago titles this year and ended the season with seven.Alanna Preddy was runner-up in the South Island fours and won a prestige interisland medal in the triples against the North Island at Auckland.

Marilyn Paterson (South Otago Town and Country) won her fifth title and gold star when she won the pairs with Jennifer Mackenzie. The duo beat Eileen and David Grant (Lawrence) 8-6. It was the fourth title for Mackenzie.

The Paretai Club has seven players under the age of 18 and two of them, Hannah (17) and Kurt (12) Botting, were in the team that won the South Otago club championships from Tapanui.

The over 60s pairs was won by Barbara Read and Doug Grant (Glenledi) and the drawn pairs by Chris Moffitt and  Hannah Botting (Paretai) for the second year in a row.

Daniel French is now in second equal spot on the Otago honours board with Bob Cowan after skipping Green Island to wins in the Otago pairs and fours last month.

He teamed with Nick Sinclair to beat Hugh Bosman and Karen Gillespie (Hillhead) 9-8 in the pairs. It was the sixth centre title for Nick Sinclair.

He then joined with  Daniel Sinclair, Lyn Rance and Brent Sinclair to win the fours when they beat Wakari’s David Webb, Brandon Williams, John Williams and Bill van der Hoek 12-9.

It was the 13th Otago title for Brent Sinclair, eighth for Daniel Sinclair and 20th for Rance.