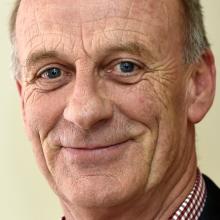 Mike Kernaghan.
Dunedin's Mike Kernaghan reached the pinnacle of his international career when he won a gold medal in the fours at World Bowls on Saturday.

Kernaghan played second in the New Zealand team that thrashed Australia 23-4 in the final at Christchurch. The other team members were Mike Nagy, Blair Signal and skip Ali Forsyth.Kernaghan (61) is the fourth Otago bowler and the first from the North East Valley club to win a world title. The others were Gordon Jolly  (Leith) 1966, Noeleen Scott (Cromwell)  1973 and Ian Dickison (Leith) 1988.

"I thought about Ian today," Kernaghan told the Otago Daily Times, shortly after his win on Saturday.

"He was a fantastic bowler and was at the top of his game when I was growing up in the game.

"I admired Ian’s approach to bowls and tried to attain the high standard he reached.  It was very satisfying for me today."

Kernaghan, like Dickison, is an old boy of Otago Boys’ High School.

Kernaghan was supported at Christchurch by his wife Jan,  and daughter Kate who flew down from Hamilton for the day. Son Liam was competing in a pipe band competition at Palmerston North and could not attend.

"It was great to have them here and, for once, Jan watched most of the game," he quipped.

His wife usually gets the jitters and finds it difficult to watch Kernaghan play.Kernaghan was accurate on the draw and was the steady member of the Black Jacks four.

"I was happy by the way I played. I just wanted to do my best and, if it was good enough, win."

"I treated it as just another game of bowls. The Aussie boys were the defending champions but things went our way today."

Kernaghan finished World Bowls with a bronze medal in the pairs with Shannon McIlroy and gold in the fours.

"If you had said to me at the start of World Bowls that this would have been the outcome I would have taken it."

Kernaghan has been in dominant form in New Zealand’s domestic bowls over the last five years but did not know if he was ready for the big time when he was selected for the Asia and Pacific Bowls a year ago. He proved that he was up to it by winning a silver medal.

"I wanted to test myself to see if I was good enough to compete at that level again. The Asia and Pacific gave me a bit of confidence. It is all very well just being in the team but you have got to be competitive.

"We have played well in the last two weeks so I’m really pleased."

The next major bowls target for Kernaghan is the Commonwealth Games, on the Gold Coast in 2018. It is too early to think about another World Bowls in 2020.

Kernaghan celebrated his gold medal win by having a few beers with his Australian opponents.

"We played them in three practice matches before the world champs and got to know them really well. They are great guys," he said.

Bester, who won silver at the Glasgow Commonwealth Games, reduced that to 18-15 after 19 ends, but the 29-year-old Kiwi maintained his composure. It was McIlroy’s second medal of the championships after the pairs bronze.

Earlier in the day, Jo Edwards and Angela Boyd fought back in the women’s pair but Welsh duo Jess Sims and Laura Daniels held on for a 16-15 win.