Pool of death no problem 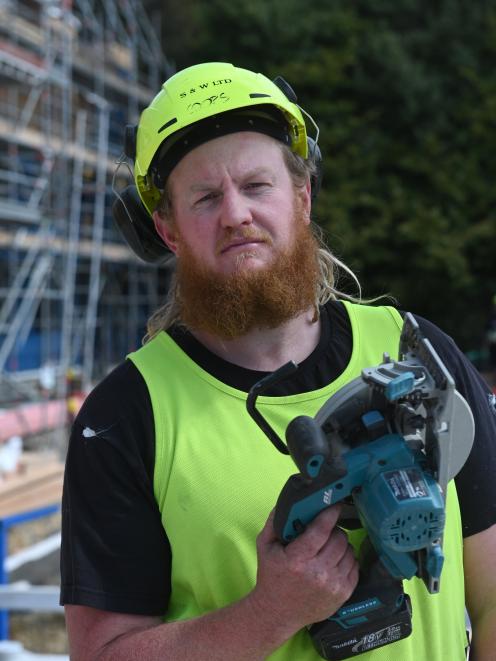 Bowler Sam Cooper on a work site in High St. PHOTO: LINDA ROBERTSON
Dunedin builder Sam Cooper intends to make the most of his opportunities at the annual North East Valley 10,000 tournament at 1pm today.

Cooper (35), the site foreman for Stevenson and Williams at the old High Street School development site, gained entry to the 29th edition of one of the southern hemisphere's premier tournaments by winning the club qualifying tournament.

Despite being drawn in what could arguably be considered the equivalent of football's "pool of death", he intends to make the most of his opportunities and is hopeful of taking a few scalps.

It will be a baptism by fire into international competition for Cooper, as his first four of seven games in section play are against seasoned internationals.

These players will provide something of an entree before Cooper comes up against defending champion Aaron Wilson (Australia).

"I just hope I can take a point out of him at least," Cooper said of the daunting task of taking on Wilson in the sixth round and not ending the match with a zero beside his name.

Cooper will then face Auckland qualifier Peter Thorne (Hillsboro) in his final game of section play.

Cooper, who is married to Lucy, with a daughter, Charlotte (18 months), is focused on coming out of the tournament in one piece and making the most of his opportunities, saying bowls is the kind of game in which everyone has a starter's chance.

A captain of the Dunedin premier 2 rugby team for five years, Cooper has only recently decided to hang up his rugby boots, after mixing his love of rugby with that of bowls for the past 14 years.

His only claim to rugby fame was his solitary game for the Dunedin premier 1 team, in 2015, when the side lost the Larry Salmon Trophy match to Pirates.

Having grown up watching his grandparents playing bowls, it was not until he was living in North East Valley that he and his flatmates received a pre-season flyer in the mailbox from the local club and decided to go along and have a look and a "roll-up".

"Yeah, they haven't managed to get rid of us ever since."

Cooper is the third of the five flatmates to have qualified for the 10,000 over recent years, after Craig Ellis and Matt McCombie.

He has a philosophical approach to the weekend tournament, which contains no fewer than 19 internationals in the field of 32, saying everyone wants to play the best.

"I'm going to have to play Aaron Wilson, who's won two. Shaun Scott's another past winner and a beaten finalist a couple of times. Andrew Kelly used to stay at our place when he came down for the tournament. So I know most of the guys pretty well."

Although he has several club titles and a bronze medal in fours from the national championships in 2012, Cooper is yet to win a centre event. He had been in teams that had been beaten in "unfortunate circumstances", he said.

He will have family support and his father, Steve, will watch the live-stream of the event from Australia.

Cooper is also a singer in bands around town.