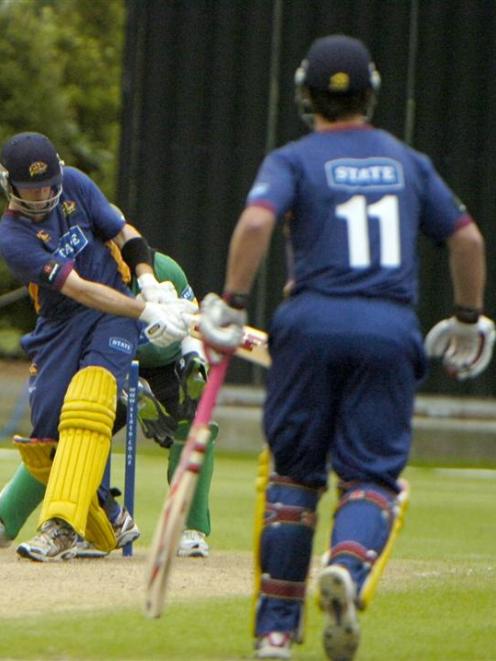 Otago opener Aaron Redmond sweeps for four on his way to 100 not out in the twenty/20 match against Central Districts at the University Oval last night.Team-mate Neil Broom backs up. Photo by Jane Dawber.
Otago's five-wicket win over Central Districts had everything, and the biggest crowd of the summer was there to witness the drama.

There was even controversy at the end to complete the stunning match.

The win lifted Otago to five wins from six matches and, with two round-robin matches remaining, the Volts are well placed to make the March 1 final.

Central started well with Jamie How pouncing on a short delivery from Dimitri Mascarenhas and drilling six over square leg.

He repeated the dose in Mascarenhas' next over as his side raced to 60 for one from six overs.

Ian Butler got the first breakthrough when How holed out to Mark Craig at mid-on for 27.

The wicket did little to arrest the momentum, with Peter Ingram and Mathew Sinclair flogging fast bowler James McMillan for 20 runs off his first and only over.

Nathan McCullum helped slow progress with two wickets in his first over, removing Ingram for 24 and capturing Sinclair in front for 18.

Former Otago player Kieran Noema-Barnett departed to a brilliant catch from McCullum diving to his right.

Oram began slowly but eventually gave a glimpse of the onslaught to come with a heave over mid-wicket for four.

The Otago captain had the last muted laugh, however, nicking Oram out with his final ball for 51 off 27 balls.

Redmond smote a massive six over the media box off Ewen Thompson to get Otago's reply off to a rapid start.

His opening partner, Hamish Rutherford, had a short stay at the crease which ended when he had a slog across the line and was bowled by Michael Mason for two.

Brendon Diamanti helped put the brakes on the run-rate with some tight bowling, and Neil Broom's patience ran out on 22 when he picked out Greg Hay in the covers.

Redmond, though, kept finding the boundary, sending a Robbie Schaw delivery over the sightscreen as he closed in on his maiden twenty/20 century.

He brought up the milestone with an inside edge and scampered through for a single, punching the air in delight.

Umpires Evan Watkin and Chris Gaffaney brought the game to a close when they awarded Otago six penalty runs after Central failed to start its last over by 8.02pm.

The clash between Northern Districts and Canterbury at Seddon Park in Hamilton last night was decided by a sudden-death over, with the southerners coming up trumps, NZPA reports.

Northern could only make six off a Shane Bond over, and Canterbury took just two balls from Trent Boult to better that.

Auckland opener Martin Guptill whacked 43 off 21 balls to set Auckland on the way to a five-wicket win over Wellington in the capital last night.

The host compiled 145 for nine and Auckland reached the target with four balls to spare.