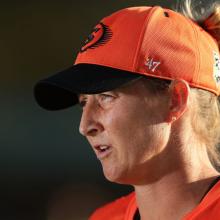 That was how Sophie Devine described being able to smash a record-breaking century just days after two weeks in a hotel room.

There was no rust evident as the Wellington Blaze opening batter scored a record-breaking century on her return to New Zealand cricket at the University Oval yesterday.

She smashed a 36-ball century, breaking Tim Seifert’s previous Super Smash record for both men and women by four balls.

It was also a world record for the fastest century women’s twenty20 century, beating Deandra Dottin’s 38-ball effort for the West Indies in 2010.

Her eventual 108 not out the Blaze chase down the Otago Sparks’ 128-run target for the loss of no wicket within nine overs.

To make it even more impressive, she completed her two weeks in managed isolation only on Sunday, having just returned from starring in Australia’s Big Bash.

During that time, she was unable to train.

However, that did not slow her down as she smashed nine sixes and nine fours in a devastating innings.

"I think I’ve been really fortunate, I’ve been playing a lot of cricket the last three or four months in Australia," Devine said.

"Obviously it’s not ideal having two weeks of doing not much.

"But I had full faith it would come back pretty quickly.

"I guess it’s a bit like riding your bike, you don’t forget how to do it."

Devine, who is among the world’s best twenty20 batters, admitted feeling a little lucky.

She had survived a touch-and-go run out decision in the first over and said it was possibly out.

However, it was a case of making the most of the break.

While she went on to deliver the starring performance, she was quick to praise fellow opener Maddy Green, who scored a tidy 20 not out.

"It certainly helped having Maddy down the other end. She was probably the calm head between the two of us," she said.

"For me it was just trying to play good cricket shots.

"I haven’t been able to play too much cricket of late.

"So it was nice just to spend some time in the middle and just to hit the areas I want to hit."

One of her big blows hit a small child in the crowd. Devine showed a nice touch by going over and seeing how the child was straight after Wellington had won the game. She comforted the child and had a mandatory selfie.