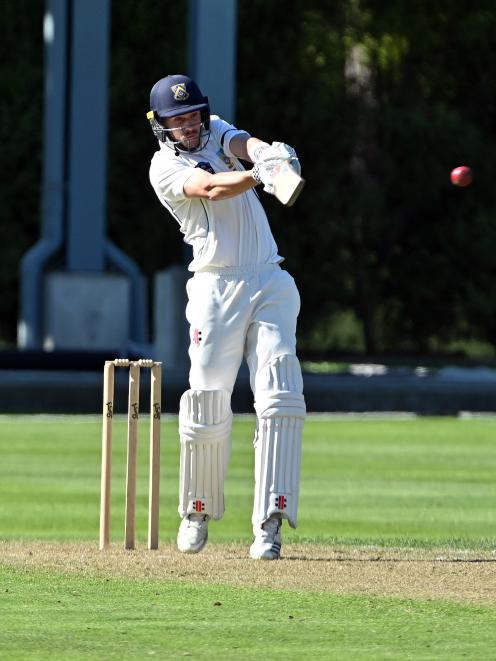 Otago batsman Mitchell Renwick plays the ball on to the onside during his maiden first-class century in a Plunket Shield game against Auckland at the University of Otago Oval yesterday. PHOTO: LINDA ROBERTSON
There was not much to play for but it was a day to remember for Otago Volts batsman Mitch Renwick yesterday.

The Volts were taking on Auckland in the first day in the final round of the Plunket Shield.

The victor of the shield was decided before a ball was bowled when Canterbury announced on Saturday it would not play Wellington at the Basin Reserve because of the mosque attacks in Christchurch on Friday.

Auckland fronted yesterday without two of its leading players.

Internationals Martin Guptill and Lockie Ferguson elected to step down from the match.

Auckland Cricket high performance manager Simon Insley said Guptill and Ferguson felt personally uncomfortable making the trip to Dunedin, given the events in Christchurch, and also, the feelings and concerns of their partners and families.

"Auckland Cricket and New Zealand Cricket completely respect and support their decision. We understand that at times like this, families come first,'' he said.

At the University of Otago Oval yesterday, Auckland won the toss and decided to bowl.

But the visitors spent the bulk of the day chasing leather and may have regretted putting the home side into bat.

Otago opened up with a sound partnership from Hamish Rutherford and Cam Hawkins before they both fell on 63.

Renwick and Brad Wilson then came together and the duo shared in a big partnership as the Auckland bowlers failed to get much out of the wicket. Renwick pushed on into the nervous 90s before scoring his first first-class century.

Wilson went for 71 while Anaru Kitchen made a breezy 20 before falling early in the final session.

In the later stages of the day, Otago looked to push on but were tied down by some good Auckland bowling. Renwick eventually went for 131 and Otago ended the day on 320 for six wickets.

In the other game, Central Districts bowled out Northern Districts for 194 in Hamilton, Doug Bracewell taking four wickets.

In reply, Central Districts had got through to 107 for two wickets at stumps.