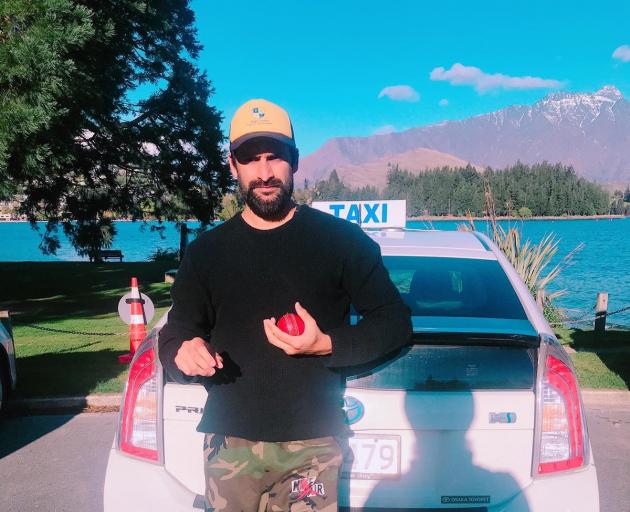 Queenstown cricketer Swaran Sandhu, who returned figures of nine for 21 in a Crosby Morris tournament match against South Otago in Alexandra at the weekend.PHOTO: SUPPLIED
Small target. Big result.

Queenstown cricketer Swaran Sandhu figured if he could just pitch the ball in the same spot each time he could be in the wickets.

And, oh boy, was he right about that.

The 31-year-old taxi driver tore through the South Otago line-up, capturing nine for 21 from 7.5 overs.

The key part of that last sentence is worth repeating again. He took nine for 21.

South Otago was chasing a modest 163 for victory but was bundled out for just 50 in the second match of the Crosby Morris tournament in Alexandra at the weekend.

"I don’t know how I did it," Sandhu told the Otago Daily Times yesterday.

The right arm seamer was getting plenty of help in the air and off a very green pitch as well. He was looping the ball back to the right-handers and a good chunk of them just could not keep the ball out.

Seven of his nine wickets were bowled and the other two batsmen were trapped lbw.

"When we batted they bowled really well and the ball was swinging," Sandhu said.

"So I had the thought we might have the same swing when we bowl and my plan was to bowl with the wind.

"But I actually ended up bowling into the wind and it helped with my inswingers."

It certainly did. As well as the nine-wicket haul, Sandhu bagged a hat trick.

He had taken a couple of five-wicket bags before but Saturday was by far his best performance.

As the wickets kept tumbling, Sandhu could barely believe it.

"When I took five wickets I thought this is a good performance for me. I was just trying to hit the one spot on a good length and if it swings back in then that is good for me and I can get a wicket."

"Anyone can take four or five wickets, but this many is kind of miraculous really."

Queenstown’s next match is against Molyneux Cricket Club this weekend.