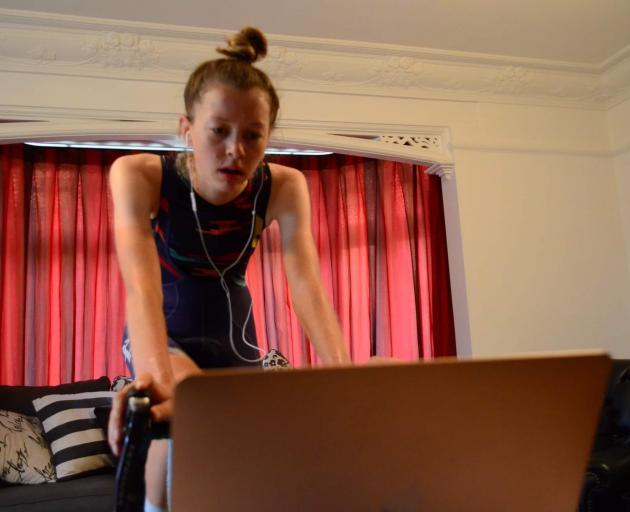 Dunedin cyclist Ella Harris trains in the comfort of her parents’ living room. PHOTO: SUPPLIED
Ella Harris did not muck around when she decided to come home.

The young Dunedin cyclist headed to Spain in early March eyeing up a season lasting until October and possibly including a ride in the Giro Rosa in Italy, the most prestigious women’s road race in the world.

But instead Harris (21) is cycling in her parents’ house on a trainer and racing on a big screen.

She said in the end coming home was the safest and only option to escape a lockdowned Spain, suffering in the Covid-19 pandemic.

"I was preparing for races starting in April but then things started to escalate quite fast," she said.

"My coach went back to Australia and then the country went into complete lockdown. It started to look like coming home was my best option. So I made my decision and got out of there."

She booked her ticket at 10pm at night and was on the plane 12 hours later and headed home.

"There was no real quality of life. I could not train, could not ride anywhere and everyone else had left."

She is now back on her bike in Dunedin but has been training indoors. She said the lockdown rules meant she could not go for a long ride.

Training was going fine although it was hard as there was nothing specific to be aiming for because the racing programme was up in the air.

She was just getting the legs going and building up her conditioning.

It was possible cycling events would start up again in August or later but there was also the issue of being able to get back into European countries.

As with many sports, the season may be extended and she is looking at competing at the world championships in Switzerland at the end of the season.

She had a good start to the year, winning a stage in a women’s race in New South Wales and then finishing in the placings at the national road championships in Cambridge.

Harris gained her slot on the Canyon-SRAM team after winning a contest among 4500 cyclists through an online competition just over 18 months ago.

Long term, the Commonwealth Games in 2022 in Birmingham were something to look at and then the Paris Olympics in 2024.

New Zealand has not qualified a rider for the women’s road race for next year’s Olympics.

At 21, Harris is a pup in road cycling terms

"There is room for improvement, just get physically stronger. The best cyclists now are well into their 30s."