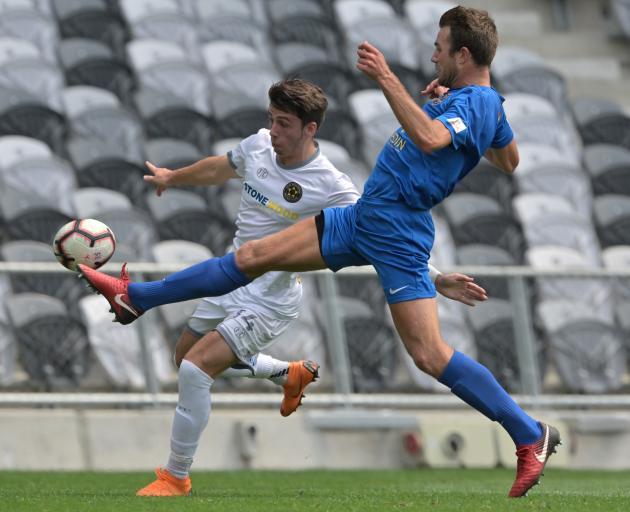 Southern United defender Erik Panzer gets across to clear the ball from Team Wellington’s Jack-Henry Sinclair. Photo: Gerard O'Brien
Southern United's place at the top table looks assured into the future regardless of its performance on the pitch.

New Zealand Football produced a document outlining the future of the national league yesterday, which it had under review for most of the year.

The new league, which will come into being in the 2020-21 season, will remain with 10 teams but will get rid of the youth teams.

The review outlines what players and clubs can do and the official season will be from October 1 to September 30.

Players will be able to register for only three clubs in any one year and can officially only play for two of them.

The national league will have two full rounds, making up 18 games. Upon the completion of the 18 games, the 10 teams will split into two separate divisions - a top six and bottom four. They would then play more games for a total of 23 games for the season. This was getting closer to the optimum number of 30 games being played per season by a top player.

The league will continue to be played in the warmer months, between May and November.

Summer was the best fit as it did not conflict with the world football calender. Grounds and facilities were more accessible in summer.

The southern area had one of the five slots and as it only fields one team - Southern United - in the league it has a guaranteed place in the 10 teams. Other protected slots are in Mainland, which has two teams at present - Canterbury and Nelson. The Central region has two protected slots, though one of those is for the Phoenix youth side. The Central region has three sides: Phoenix youth, Hawke's Bay and Team Wellington.

The relegated team will be between the teams which finish in the bottom-three places, though it will be spread over three years.

The team which wants to come up will have more than a year to be prepared for the premiership.

By March next year, guidelines will be developed to show what prospective new clubs have to carry out to join the premiership for the start of the 2020-21 season.

The national youth league will finish after this season and under the new league, clubs will have 40 registered players.

The youth league is to finish so all finances and resources can be poured into the expanded league.