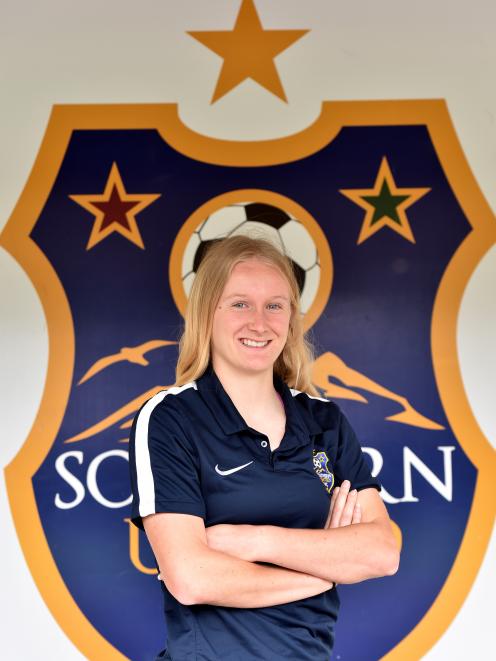 The 18-year-old spent most of her life playing against boys while growing up in Nelson.

She then had two years training with the national programme in Auckland, where she also played national league for Northern.

This time a year ago she was starting for New Zealand at the under-17 women's World Cup in Spain, where

she helped the team to an historic third place.

So when she decided to come to the University of Otago to study physical education, Southern United was more than pleased.

"Football definitely wasn't a reason I came here, but I knew if I came here I could still do quality football," she said.

"I really wanted to study in Dunedin, that was my main reason.

"It was just aligning everything else I wanted to do and there was enough for me here for football."

Mackay-Wright has been key in the Southern national women's league team's defensive line this season.

She has enjoyed the season and felt the football had been of a high quality.

While the team is no longer able to make the final, it remains motivated to win its final two matches.

The first of those is today against Auckland, in which she will come up against some familiar faces.

Mackay-Wright's time in Auckland had exposed her to many of the country's top women's players.

It had ended in the World Cup success, which had been the reason for the move.

That success was something she still found hard to believe.

"It was about a year ago now and we keep getting random memories pop up [on social media].

"I still can't quite believe what happened.

"It was an amazing team, amazing coach, everything worked in our favour."

Before moving north she had not had much exposure playing against women.

Growing up in Nelson she had played almost exclusively with boys, alongside her best friend Amelia Abbott, who also made the World Cup squad.

It took a while to convince some of the boys and parents of her ability.

It was something that she felt had helped her develop.

"The boys were very technically good.

"Against women I'd have to be stronger, because they were fully grown women.

"I was as fast, I could keep up with them, but the strength was the hardest part.

"I felt like I was good enough technically because the boys tested me there."