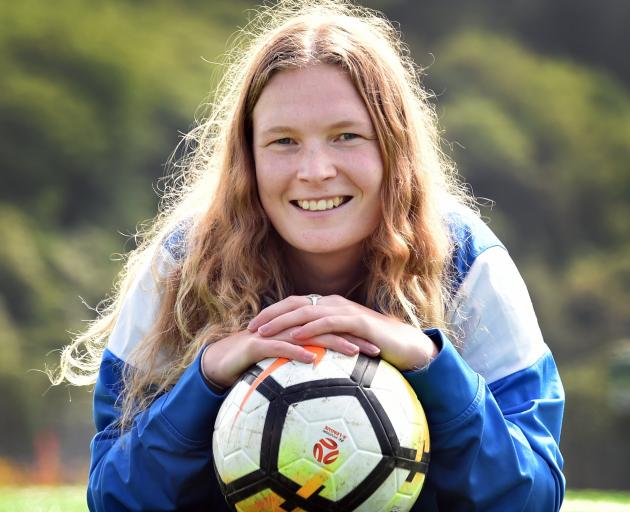 Southern United defender Kelsey Kennard relaxes at Logan Park Turf on Thursday ahead of today’s game against Central. PHOTO: PETER MCINTOSH
Every year, Kelsey Kennard says it will be her last season of national league football.

But every year, something brings the Southern United defender back.

She certainly reaped the rewards early on for returning this season.

Kennard was influential in that as well, forming part of a steely defence that weathered a 25-minute attacking storm to open the game.

From there, Southern took control and won 2-1 at English Park.

The 26-year-old has been with the team, initially as the Football South women’s team, since she was 14.

In that time, Southern has beaten Canterbury just twice — a 2-1 upset in 2017 being the only other victory.

While results were not her primary reason for playing, getting last week’s win after being with the team and group of players for that long had been special.

‘‘This probably sounds really philosophical, but I don’t play football for the results,’’ Kennard said.

‘‘Even though I play against a lot of the girls in club season, we all come together really well. It is nice to see all that work, and all the things we’ve been through as players, culminate in a win like that.’’

An ever-present and reliable figure in the centre of Southern’s defence, Kennard has been a picture of consistency in the national league.

That influence extends to Dunedin Technical — to become the South City Royals — where she has played over 150 games and been integral to the club’s dominance of the local women’s scene.

Kennard has experienced Southern’s transition from an easy-beat in her early days to a genuinely competitive outfit over the past five seasons.

She has never forgotten what it was like to be the young girl just joining the team, though.

‘‘I guess for me being there as a younger girl having the older ones there that looked out for us, I want to make sure I’m doing the same for our young girls coming through.

‘‘They’ve got so many more opportunities than my age group had when I was that age. It’s just exposing them to it, but making sure they had fun as well.’’

Central had a loss to Capital in its opener and Kennard said it was a young and fast team, that liked to press.

It is also a team Southern has been dominant over in recent years, although Kennard was wary of taking it lightly.

She said it had always given Southern tough games.