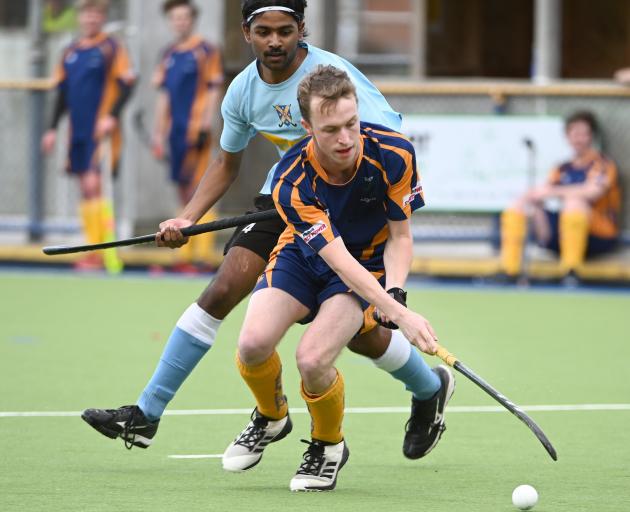 Both keepers, Allan Carson (Blue Whales) and Felix Creighton-Syme (Tuataras), made quality saves off early drag flicks as the sides showed they were not overawed by the occasion.

Callum Dempster opened the scoring for the students with a bullet strike, while leading scorer Henry Will made it 2-0 to the Blue Whales just before the end of the first quarter.

Both teams showed plenty of enterprising ball movement in the opening minutes of the second quarter.

Taieri made a raid up the left wing and a cross to James Nicholson gave the Tuataras their first goal and reward for the build-up play.

Just before the end of the first half, Taieri had a penalty corner and a chance to level the scores, and a stroke was awarded after a Blue Whales foot on the goal-line stopped the shot from the Tuataras.

From the spot, Jordan Ward scored and at halftime it was 2-2.

Tensions were rising in the third quarter as a challenge on Will by Brandon Peck left the Blue Whales striker less than impressed.

It was end-to-end hockey but with very few shots on goal, one by Taieri’s Finn Ward sailing high over the goal.

It was still 2-2 heading into the final quarter before the Blue Whales broke the deadlock through a nice flick by Ollie Schnauer.

With the Tuataras motivated to get an equaliser, University goalie Allan Carson stepped up to make some superb saves.

The Tuataras took their goalie off, and there was drama with the last play of the
final.

Taieri had a penalty corner and, despite the shot going in leading to celebrations by the Tuataras as they thought they had taken it to extra time, the shot was called too high by the umpires as it had not hit the backboard.

Calm was restored and the Blue Whales were able to rejoice in their success.