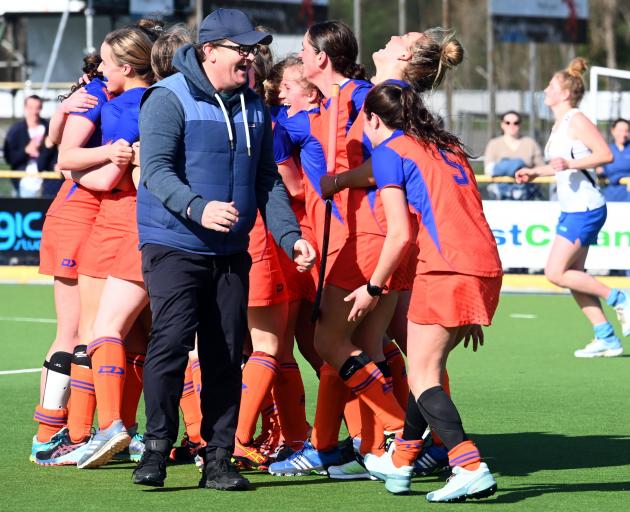 City Highlanders players celebrate with coach Ben Varkalis after their dramatic win in the Otago premier women’s hockey final on Saturday. PHOTO: LINDA ROBERTSON
The City Highlanders finally got the monkey off their backs.

In their third straight Otago premier women’s final, the Highlanders exorcised their shootout demons when beating a gallant University Huskies side 3-1 on penalties.

Both teams made a cautious start but University took a 1-0 lead near the end of the first quarter through a tap-in from Georgia Ronowicz.

City was battling to get any fluency in its play. It was guilty of some sloppy passing and handling and struggled to put a shot on goal, and the frustration was evident.

To their credit, the Huskies’ midfield and defence were nullifying the Highlanders’ attack.

City earned a couple of penalty corners near halftime but there were no openings, and the Huskies maintained their 1-0 lead at the break.

Much of the third-quarter action took place in the midfield, as both teams struggled with trapping errors. Ronowicz had one shot on goal but it was saved by Ginny Wilson.

Finally, City capitalised on a series of penalty corners with a textbook goal from Sarah Thomas, and it was 1-1 after three quarters.

University’s Maia Shackleford had a one-on-one with Wilson and she evaded the goalie, but her shot hit the framework on the angle with barely two minutes to play.

This led to a shootout for the third year in a row, and no doubt City players were casting their minds back to previous grand final shootouts.

Tegan Buchanan converted the opening penalty for the Highlanders, Wilson blocked Paige Mackie’s attempt for the Huskies, and Olivia Allan converted to give City a 2-0 lead.

Goalie Pippa Croft made a save for the Huskies, and Meg Smith scored for the students to make it 2-1.

Both Bayley Anderson and Georgia Hall missed, leaving Sophia Kersten the opportunity to be the hero.