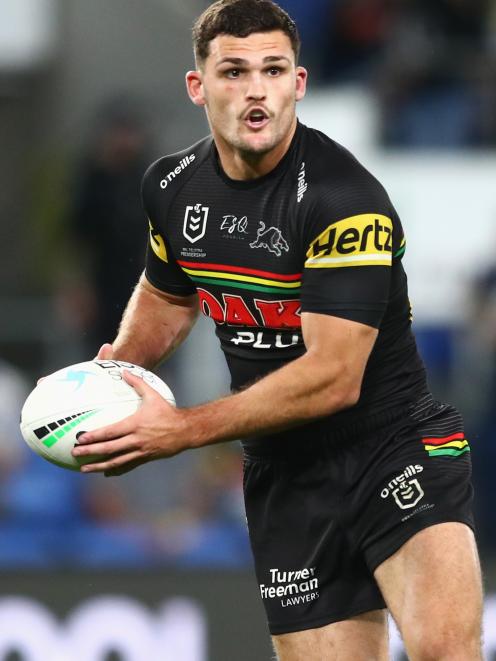 Penrith Panthers half Nathan Cleary looks for support during his team’s round 25 NRL match against the Parramatta Eels at Cbus Super Stadium on the Gold Coast earlier this month. PHOTO: GETTY IMAGES
While the sporting world is again dominated by Covid-19, the NRL has soldiered on, despite a couple of hiccups. They included more bubble breaking than a child’s birthday party, and a new venue for Grand Final day, with Suncorp Stadium being announced as host for the first time in history. Michael Minty looks ahead to the finals starting tonight.

Some will argue the NRL is a two-horse race between minor premier Melbourne and fellow heavyweight Penrith. However, Manly might just have something to say — especially with star fullback and Dally M winner Tom Trbojevic in career-best form.

The Storm will be sweating on the fitness of Cameron Munster (knee) but Craig Bellamy may be forced to roll the dice with Munster and play him — get the win and a week off to recover. Manly is at full strength and has an advantage in the goal kicking department with Reuben Garrick, should the game come down to a penalty-fest.

Manly is in super form but the Storm is the master of shutting down key players. The Storm to book a spot in the preliminary final by a point.

Storm: Beat the Rabbitohs in the preliminary final before the Panthers earn revenge by beating the Storm in the grand final.

Manly: Beat the Roosters in week two before losing to Penrith in the preliminary final.

If Trent Robinson had any doubters about his coaching ability with an already stacked team, they’ve certainly been silenced as the Roosters have refused to let a horrible injury toll curtail their season after just missing out on the top four.

They face a Titans side that can be a bit Jekyll and Hyde, finishing the season on a high with a vital but spiteful thrashing of the Warriors, to play finals footy for the first time in five years. Young fullback Jayden Campbell, the son of former NRL star Preston, has been a shining light. In a unique twist, Roosters veteran Josh Morris lines up to face Jayden 14 years after facing Preston in his rookie season.

Despite the horror run of injuries, you just can’t go past the Roosters. The Titans have plenty of potential but still look another year away from being able to trouble the glamour teams in sudden death. Could be close, though.

Roosters: Just one step too far and can’t get it done in week two v the Bunnies. A huge effort in 2022.

Titans: Finally a taste of finals footy but it’s fleeting.

Three months ago, the Panthers were unbeatable, and despite going through a trough during the Origin period, they appear to be back on track and peaking at the right time. They come up against a Rabbitohs side many believe can challenge the top two, but that is debatable.

The Bunnies have shown vulnerability this year, conceding over 50 points against the top two teams within three weeks of each other. You’d put them in the “best of the rest” category but it will take a heck of an effort to topple the Panthers, led by the best half in the game, Nathan Cleary.

Penrith — just too much fire power, and forwards who will set the platform. Their strike rate in the red zone is second to none.

Penrith: Beat Manly in the preliminary final to force a rematch of last year’s final. This time, a Nathan Cleary-inspired performance seals the premiership in a nail-biter against the Storm.

Rabbitohs: Beat the Roosters before stumbling to Melbourne in the preliminary final.

The Eels stunned the minor premier a fortnight ago to put the competition on notice after a lacklustre few weeks which ultimately cost them a top four spot. The Knights ... let’s be honest, they are making up numbers, like most of the bottom four finalists.

The Eels have already attracted the tag of flat-track bullies and should win this one, but they’ve lost a lost of games at the back half of the season and the Knights will feel they are a chance if their big names — Ponga, Pearce, Frizell and the Saifiti brothers — lead the way.

You have to back the Eels, purely on the inferiority of their opposition and the fact some of their stars were rested last week.

Eels: Will cop a flogging in week two against Manly, which will be stinging from losing to the Storm.

Knights: Not much to say here.