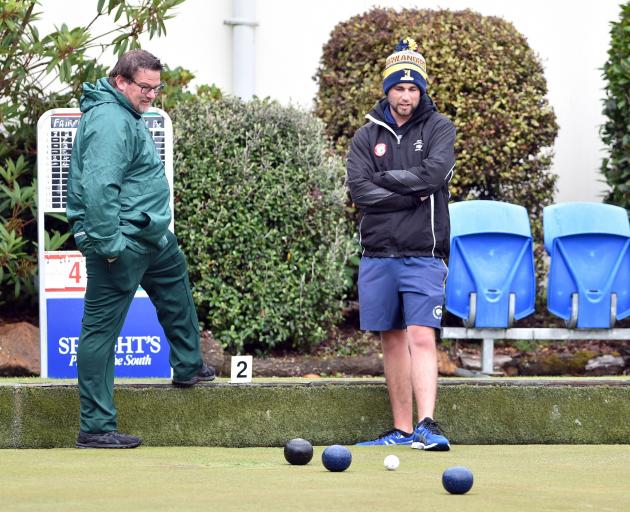 Mason skipped a Forbury Park four including Glenn Murtagh, Nigel Thompson and Duane White to victory for a third consecutive year, completing the full set of Dunedin open titles after winning the pairs, triples and singles.

That is either a first, or a remarkably rare achievement.

“It feels pretty special, to be fair,” Mason said.

“At the start of this season, I thought none of this would ever happen.”

Until the current season, centre titles had proved somewhat elusive for the 27-year-old bowler, who had collected just three centre titles in a decade.

Two of those were earned with Murtagh, Thompson and White for back-to-back victories in the Bowls Dunedin open fours in 2020 and 2021.

His other title was in triples in 2020, when he skipped the Forbury Park trio including Thompson and Dave Callon.

Mason’s four did not have it all their own way at the North East Valley club on Sunday, having to overcome a tough challenge from the Regan Larkin-skipped Fairfield four that included John Latimer, Reece Aitken and Roger Barron.

The game turned on a change of tactics from Forbury Park on the 10th end.

Trailing 7-6, Murtagh, Thompson and White all crowded the jack, forcing mistakes from the Fairfield quartet to draw three shots and set up a 9-7 advantage.

The Forbury Park four then capitalised on errors and exerted some pressure to lead 11-7.

Larkin was forced to drive and killed the 12th end with his final bowl to force a replay of the end, but Forbury put one hand on the title when it jumped out to a 15-7 lead.

Fairfield pulled a shot back on the 13th end but the Forbury four crowded the jack on the 14th end to draw two shots for a 17-8 victory.

“They [Fairfield] played pretty well in the first half of the game,” Mason said.

“We just had to bide our time and wait to take our chances. Eventually, we got a couple of numbers which gave us a lead and made it a bit easier.”

Mason heaped praise on his team, saying that to go three years in a row with the same quartet was “pretty special”.

With the champion of champions competition round still to play, Mason said first he had to win a club title — something he had yet to achieve.

Aside from it being Mason’s seventh title, it was Thompson’s fourth, while both Murtagh and White earned their first centre gold stars with what became their fifth titles.