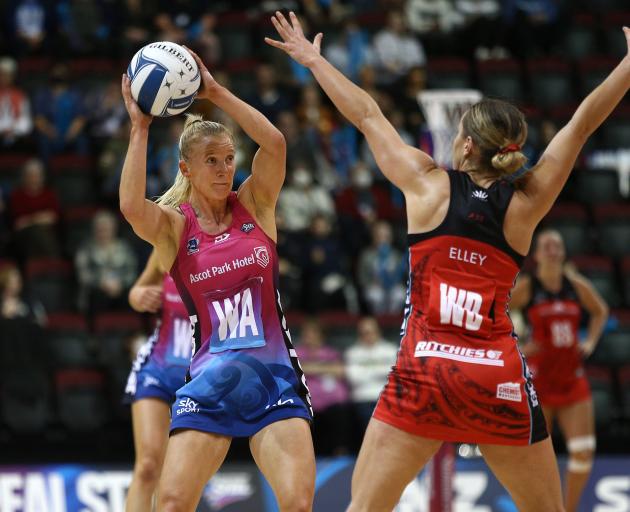 Southern Steel wing attack Shannon Saunders (left) looks for the pass while defended by Mainland Tactix wing defence Charlotte Elley during the ANZ Premiership netball game at Stadium Southland in Invercargill earlier this month. PHOTO: MICHAEL BRADLEY PHOTOGRAPHY
Perhaps there was one positive to take away from Monday night’s horrid fourth quarter for the Southern Steel.

As it approaches the congested second half of its ANZ Premiership season, the Steel is fully aware it must not let that happen again — better to learn that lesson now, too.

Centre Kate Heffernan admitted it had been a tough period and she noticed herself running up and down the court a lot more.

The Central Pulse was scoring quickly, while the Steel was unable to find its shooters, scoring just five goals in that final quarter and surrendering the lead it held the entire game to go down 50-44.

"I think if we’re going to make mistakes like that, or show weaknesses like that, it’s good to get them out of the way now, so it doesn’t happen again," Heffernan said.

"We knew they were going to come out pretty hard in that fourth quarter.

"In other situations, I’d be pretty confident we could hold them off.

"But I’m not sure . . . everything started sort of crumbling. So it definitely made us realise we have a lot more to look into than we thought.

"While it was disappointing, we’re definitely going to have to pull it apart a bit more and look into it."

While the Steel was just coming off a Covid-19 outbreak, Heffernan did not think that was an excuse for the collapse.

However, she did feel the time the team had away from training possibly had an impact, as the connections began to crumble when the pressure went on.

There will be plenty of netball to reinforce those connections over the next week.

The Steel faces the Mainland Tactix in Christchurch tomorrow, the first of four games in eight days — a rescheduled game against the Waikato Bay of Plenty Magic slotting in on Wednesday, during an already busy stretch.

It is a stretch that will likely define the team’s season and Heffernan said recovery would be important.

"It will be quite tough. I think it is quite an abrupt introduction back into it.

"We’ve played two games [since the Covid-19 outbreak] and still definitely getting the hang of things. But I think we’ll be fine.

"All the girls are recovering really well; we’ll just have to nail everything. And then recovery, nutrition, sleep and all that kind of stuff, to make sure we recover fast after each game, so we can bounce back and play in the next couple of days."

Heffernan had something of a breakout season a year ago, starring for the Steel and propelling herself into the Silver Ferns squad.

Her hopes for this year had been to have another quality Steel season and, so far, she has delivered.

There remains plenty to play for in the coming month, too, with Commonwealth Games selection very much a possibility,

but it was not dominating Heffernan’s focus.

"Obviously it is in the back of the mind.

"I’d love to be with the Silver Ferns and going to the Commonwealth Games, but then I also know there’s a lot of work to be done — just making sure each game I put out the best I can. That’s really all you can do.

"It’s in the back of my mind, but I just want to have good solid season with Steel.

"That’s what I’m thinking more about, not trying to get too ahead of myself.

"I don’t think that’s the best thing to do."