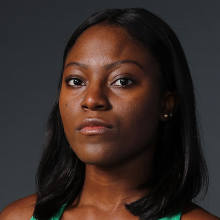 Kalifa McCollin. Photo: Getty Images
At this point, frustration would be an understatement.

Kalifa McCollin is a 50-50 chance to take the court for the Southern Steel this weekend.

The shooter left last Sunday’s win over the Northern Mystics 10 minutes from the end after sustaining an ankle injury.

It followed season-ending injuries to the side’s other two shooters — Jennifer O’Connell and Georgia Heffernan.

Coach Reinga Bloxham said the ankle was "not looking too bad", although McCollin still had some pain.

She had a scan yesterday.

Bloxham said if things were not too bad, McCollin would travel with the team.

It plays the Northern Stars in Auckland on Saturday, followed by the Waikato-Bay of Plenty Magic in Hamilton on Monday.

Otherwise, she would rest for the following weekend’s games, a double-header in Invercargill.

Grace Namana will travel with the team regardless, while the Steel is also looking to bring in former Central Pulse and Mainland Tactix player Gemma Hazeldine as cover.

While the Steel had been trying to stay positive, losing a third shooter in a month was starting to make that difficult.

"It pretty much sucks to be honest," Bloxham said.

"It does sum up the season.

"I thought we played so well as a team at the weekend.

"We had really worked hard on our game plan and understanding what we needed to do.

"I thought we executed so well.

"And we’ve just been dealt another blow, so it is a little bit frustrating and maybe even a bit disheartening.

"We just have to keep trying to do our best with what we’ve got and make the best of a crappy situation."

The constant changes had made building connections difficult.

However, Bloxham said the experience of Shannon Saunders and Gina Crampton had been key in helping the new shooters coming in.

She also praised young shooter Kiana Pelasio, who has come in under pressure and grown with every game.

The side faces its final weekend of travel this week, having completed six consecutive weekends away.

Notably this weekend though, the Invercargill players would take direct flights, saving them a couple of van rides.

It was an "amazing" feeling knowing that was nearly done.

Even better was knowing three home games in front of their fans — two in Invercargill and one in Dunedin — loomed on the other side.

The finals weekend follows in Invercargill on August 23.

While the final may be out of reach for the Steel, Bloxham said the Steel was still focusing on finishing as high as it could and making the third-fourth playoff.